Things We've Been doing BESIDES Playing With Kittens . . .

Since the last update pretty much focused on the kittens, I thought I'd share a few OTHER things we've been up to recently . . . 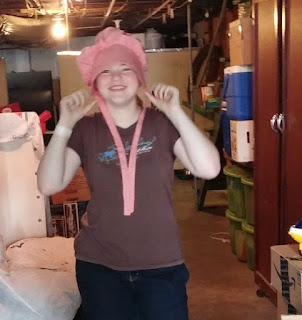 A friend from church is getting ready to move. Since I know just how challenging packing can be with young children, we've gone over a couple times to help. Little Bit has fun playing with her girls, which also nicely keeps them occupied. And the big girls and I can help pack, carry boxes, etc. And sometimes be silly when we find sunbonnets and such :) 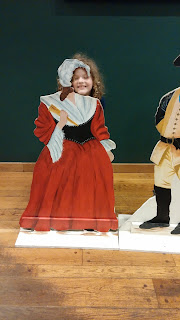 Last fall, just as we jumped into the whirlwind of buying our house and moving, we came the American Revolution in history. I had good intentions to do several field trips, but moving took precedence, and then winter . . . (though when I mentioned that recently, the girls pointed out that going to Valley Forge in the winter would have been more authentic LOL) . . . and then this spring we were frantically trying to get our old house ready to go on the market. . . so the field trips didn't happen. SO . . . a couple weeks ago, we finally made it to Valley Forge! 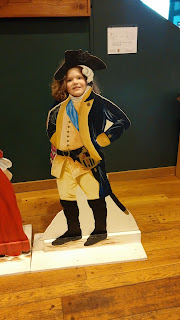 We've been before several times, but this time Little Bit was old enough to do the Junior Ranger and of course, as the big girls get older, they enjoy different aspects and understand things on different levels.  It was a fun day, despite the frustration of one of the roads on the driving tour being closed, with no indication of how to get around that and continue the tour (thank goodness for GPS *and* having kids old enough to read maps. We put the visitor center in GPS and Ashlyn paid attention on the map, and we were able to re-enter the tour route at a different point and continue). Here are a few pictures. 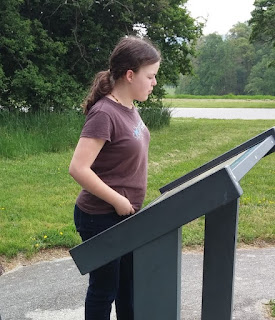 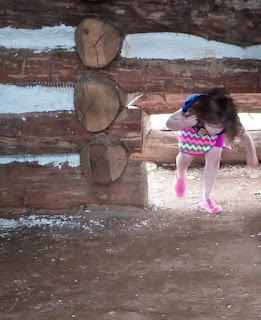 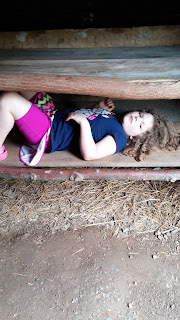 Exploring the fireplace in one of the cabins (because how often do you get to check out a chimney from INSIDE the fire place? And testing out the bunks in the cabins . . . I think she prefers her loft bed! I can't imagine grown men sleeping in such a narrow space!

A couple weekends ago we heard from our realtor that he was finally ready to list our old house on the market. Rodney, Lexie and Ashlyn spent ALL DAY that Friday finishing up/freshening up the landscaping over there. On Sunday we all went over to put the final touches on it. It looked great! It was listed on Tuesday, and by Friday we had two offers, and accepted one of them. I'll heave a HUGE sigh of relief once all inspections are done and the buyer's loan goes through and all that, but we are so thankful for such a quick sale! And I must admit, selfishly, I'm thrilled to not have to spend weeks running over there to sweep and generally clean up after showings.

Sunday was our end-of-school year evaluation. We actually officially ended our school year in February . . . since we school year-round, we don't have an end/beginning to our school years, but since the state requires more record keeping than I otherwise consider necessary, we keep those records for the required 180 days, and then declare the school year "done" and continue with our schooling, with less paperwork for me, until it all starts over again in July . . . but busy schedules meant we finally got around to meeting with our evaluator and doing the official evaluation.

And Monday we went on a homeschool group tour of an adorable little family owned bookstore in a nearby town. After the tour, the coordinator from the homeschool group had also organized a "teen day out" where the teens went out to lunch together and played board games and such, and just had fun. So, Little Bit and I got our own "day out" while Lexie and Ashlyn were making new friends and having a blast. 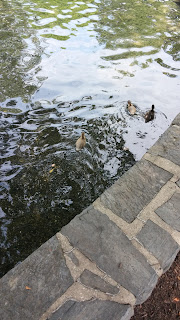 Little Bit and I got ice cream and pizza for lunch and went to a nearby park and she had fun playing on the playground, and meeting every dog she could find to meet (Ashlyn's trained her well. . . every time she saw a dog, she asked to pet it, and then, assuming she was given permission, proceeded to ask it's name, breed, how old it was, etc. . . But I think her favorite part of the afternoon was the ducks! They're hard to see in the picture, but there were some TINY babies . . . sooo cute! And there was a machine with duck food. Many of the adult ducks were, apparently, too well fed to care, and the tiny babies didn't notice the food when we tried to throw it near them, but there were some larger babies who LOVED it! They gobbled it up, dove to the bottom for any pieces they missed, and looked at us like "is that ALL?!?!?" when it was gone. Little Bit's already asked that next month for her "date" we take more food and go feed the ducks :)

So that's some of what we've been up to recently!
Posted by Unknown at 10:45 AM