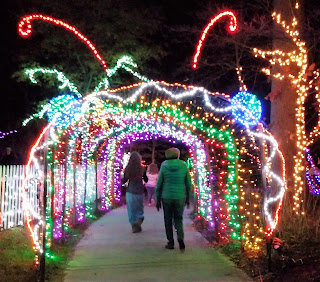 Jumping back to the beginning of December. Because why bother to blog in order, right? . . . 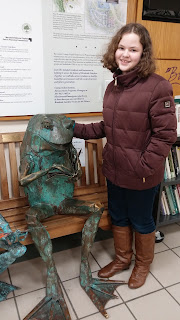 The girls and I spent the first several days of December in a whirlwind of Christmas field trips with my parents.

We started our whirlwind at Brookside Gardens. We visited the greenhouse in the afternoon, went to Chipotles for supper (it was right next to a Costco that's parking was in a parking garage. We were most amused at the contrast between that Costco and the Costco we normally shop at in Lancaster, complete with horse and buggy parking!). After supper we headed back to Brookside for their walk through light display! 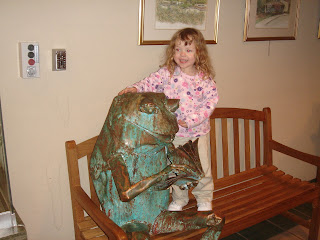 I convinced Lexie to pose next to old Mr. Frog so I could compare it to another picture of I have of her with the same Mr. Frog from a few years ago . . . She's changed just a tad in the past 10 years :)

And while we're sharing old pictures . . . this one is from Brookside Gardens too, in the green house, 11 years ago. 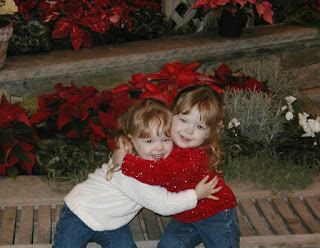 And a couple more pictures from this year's Brookside Garden lights . . . 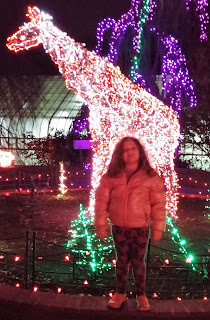 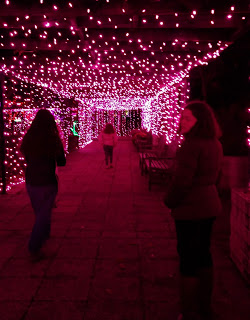 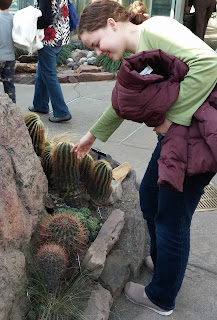 The next day we hopped on Metro and went into Washington DC. Our first stop was the National Greenhouse. Their "special" display this year was about the National Park sites and it was very cool! Though there seemed to be a disproportionate number of displays for west coast sites compared to east coast sites.  While we were at the Greenhouse we went through the permanent displays as well. Lexie entertained herself in the desert display by seeing if she could touch all the cacti without getting hurt, or something . . . 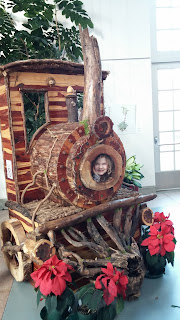 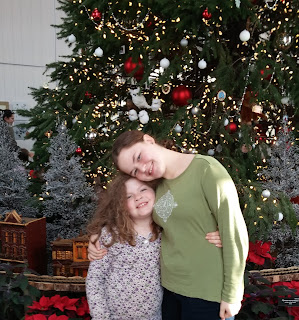 Lexie and Little Bit humored me and posted together in front of the National Park Tree (As hlyn was in a "no pictures" mood. I've joked that 100 years from now people looking back over the picture record of our life would assume she vanished at age 12 or thereabouts LOL. Little Bit also posed for me in the "Train" . . . isn't if fun? 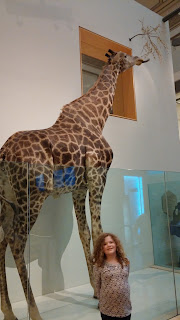 When we were done at the National Greenhouse we headed to the Smithsonian Museum of Natural History. I had an ulterior motive, a few years ago when we were at this museum, Little Bit found a giraffe Christmas ornament in the gift shop that she HAD to have. I humored her, and she LOVED it but it somehow vanished during our move last year. I'm sure it will show up again someday, but in the meantime, she was very sad to not have it, so I figured it wouldn't hurt to at least check and see if they still had them (I didn't mention it to her until I'd made sure they did). She was VERY excited to get a replacement ornament. As you might have noticed from the pictures, she kinda likes giraffes. 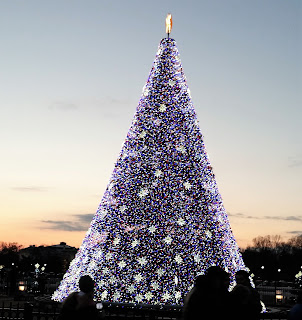 By the time we left the museum it was getting close to dark, so we went ahead and headed down the mall to catch a glimpse of the National Christmas Tree, and all the state-decorated trees. I have to admit, most years, I'm not overly impressed with the national Christmas Tree, and look forward more to seeing how all the school kids have decorated the state trees, but this year's national tree was GORGEOUS!!! So simple, and patriotic (it's hard to tell in the picture, but the little lights are red, white and blue), and just plain PRETTY! Which isn't to say I didn't also enjoy the state trees. It's always fun to see what the different states, mostly school kids, though some states have a specific artist, or art studio, to do their ornaments, come up with. 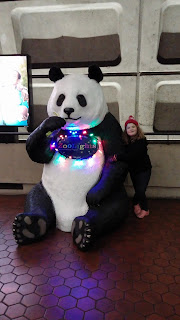 After seeing the trees, we headed back to Metro. On our way into the city, Little Bit had caught sight of "a big panda with Christmas lights". We'd been in a hurry to catch a train, so hadn't taken time to check it out then, but at her request, we hunted it down before heading home, and got her picture with it. As you can see, it's a rather creative advertisement for the National Zoo's light display :) And finally, the reason we chose this particular weekend for our field trips. Harper's Ferry's Old Time Christmas. The whole town was decorated, and had re-inactors around. It was fun. We enjoyed a harp concert at the church, visited the horses, and learned some interesting information about how they train horses to be "re-inactors" (have to teach them to not mind the gunshots and such). . . saw a shooting demonstration. A demonstration of how they baked bread . . . lots of interesting stuff. 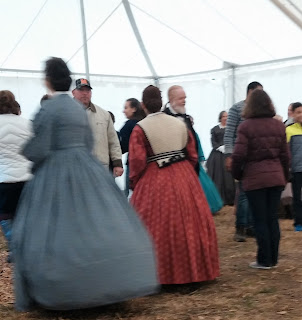 The last thing of the day, was a Civil War dance demonstration. We poked our head in the tent to check it out, and . . . stayed until the last dance was done. Lexie jumped right in and danced every dance. By the last dance, one of the instructors sought her out specifically and asked if she wanted to dance with him and be the "lead couple" because he needed someone who could follow the steps, and keep up a good pace. She loved it! It took longer for Ashlyn and Little Bit to decide to join in, but once they did, they had a blast as well. One of the dancers found out, in conversation, that we're from the Lancaster area, so told Lexie that they are from Lancaster, and offer free dance classes in Jan-March in Harrisburg . . . so that's how we knew to go to the dance class a couple weeks ago. :) 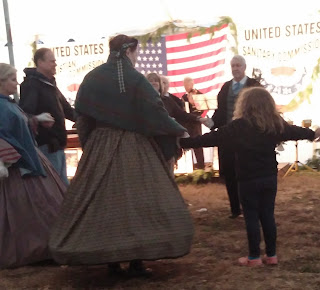