I mentioned in my last post, that we've moving toward a more Waldorf approach with Little Bit and that it was doing a unit on Math Gnomes that got me started thinking about it. So I thought, today, I'd share about the Math Gnome unit we did. I roughly followed the first grade math blocks from Ancient Hearth.

Since Little Bit already knows how to count, I did a quick "intro"/summary of the first block. We only spent a week or so on it, I just wanted her to become familiar with Roman Numerals. So, I set up the entryway shelves to be a forest scene. 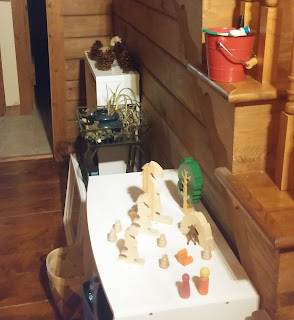 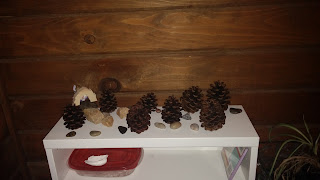 They follow the squirrel through this forest until they find a fairy guarding a cave door. She tells them that if they learn the "secret of numbers" it will open the cave door and allow them to enter the Land of Numeria.

The secret of numbers was the Roman Numerals 1-10. I used glitter glue to write the 1 I on a piece of cardstock and "hid" it in the bottom of the plastic container of salt/glitter that we use to trace letters/numbers/forms, etc.  You can see the container (red lid) on the shelf under the pinecone forest along with the white shell the fairy gave the children to dig in the glitter sand. Once she found the glitter numbers she copied them into her school notebook, then we did the same with  2 II and so on up to 10 X. Once she'd learned these numbers the fairy gave her some little black stones with regular numbers and Roman Numerals on them (I bought small black rocks at the craft store and wrote the numbers on them with a silver Sharpie). Her job was to match the regular numbers to their corresponding Roman Numeral in order to unlock the cave.  Once she did, she (and the peg children) discovered the Land of Numeria . . . This begins the second Math Block on the Ancient Hearth site. 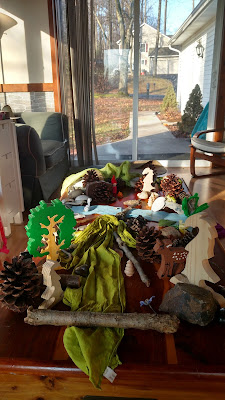 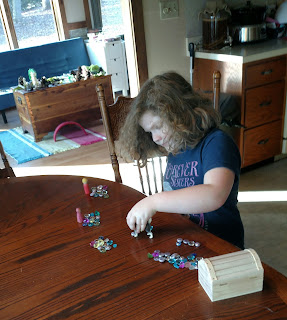 After Little Bit divided the jewels evenly. Gnome Share gave her a plate of strawberries (red like he is) to divide evenly between her, her sisters, and me. 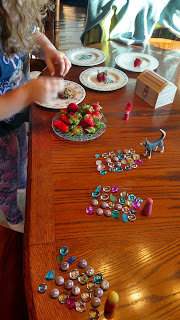 We spent the rest of that week dividing other red snacks, and practicing dividing the jewels more and such.

The next week, Little Bit woke up to a new part of Numeria on the cedar chest. 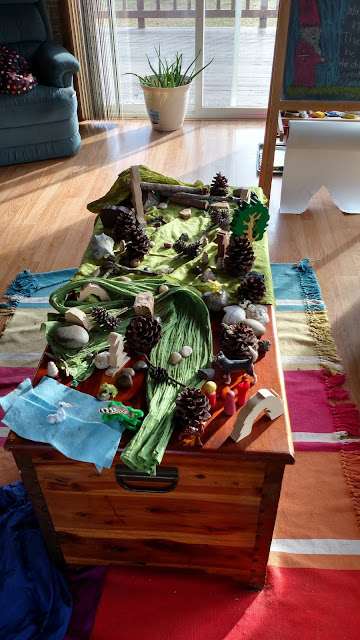 Gnome Share traveled with the children and wolf through more of Numeria until they discovered Gnome Plus. We spent the week playing with addition, and eating green snacks.

The 3rd week's journey through Numeria took introduced us to Gnome Minus Takeaway who had, unfortunately lost the shepherd boy's sheep. The wolf called his friend, the Collie to help them track down the sheep. But first we spent week 3 learning about subtraction, and eating blue snacks. 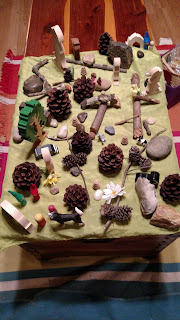 The final week, the collie led us to a different part of Numeria, where it was snowy. 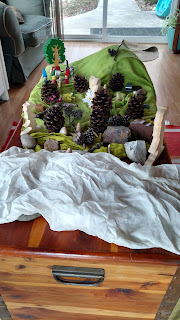 We met Gnome Multiply and he helped the shepherd boy find his sheep, hidden in the snow (Ashlyn painted the sheep & collie for me, aren't they cute?). And 4 lost sheep had multiplied into 6 sheep (2 lambs)! 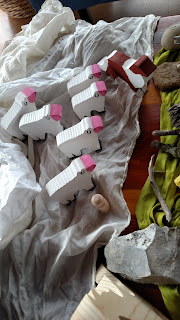 We spent the week learning about multiplication and eating yellow snacks! 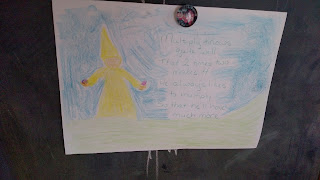 Also each week I draw a gnome picture and poem either on the chalkboard or on paper. Only managed to take a picture of the last one. Little bit copied the picture and at least part of the poem into her school book each week.

Email ThisBlogThis!Share to TwitterShare to FacebookShare to Pinterest
Labels: Curriculum