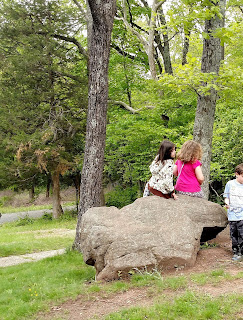 After our whirlwind of field trips in Maryland, we headed home. . . and continued to stay busy :) A few days after we got home, we went to Hopewell Furnace. They offer a free field trip for school (and home school) groups in grades 3 and up where they take the kids on a tour of the park, explaining how the cast iron was made then they let the kids make their own sand molds of a model of the stove doors that were made there. The ranger pours plaster of paris in the molds and the kids get to take home their own casting! We had a good sized group from our homeschool coop join us for this field trip. Little Bit isn't in 3rd grade yet and her bff in the homeschool group was also there with her younger brothers so their mom and I took the younger kids on their own "tour", and did the Junior Ranger with them. 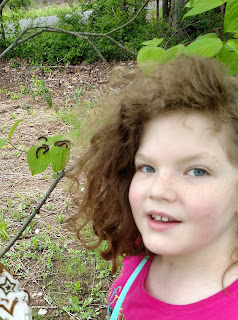 The highlight, however, were some caterpillars they found. By the end of the Junior Ranger, Little Bit and B had collected 6 or 7 caterpillars and decided to create a "caterpillar hotel" in a tree near the visitor center.  In the end, those silly caterpillars kept them occupied for most of the 2+ hours that the big kids were busy on their field trip! Since I was with Little Bit, I didn't get to actually see the big kid field trip, but Lexie & Ashlyn said it was interesting. I'm hoping to organize another group in a couple years when Little Bit is old enough to participate as well :) 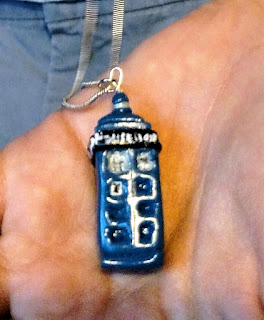 Ashlyn finished up a subscription to a ArtAchieve at the beginning of May, so is doing her own thing for art now. At the moment, she's having fun making jewelry with oven baked clay. She made coffee bean earrings for herself, Lexie, and me a few months ago. And made Little Bit a penguin bead to try out some other techniques, but her "big" project was a TARDIS necklace. She did tons of research to figure out what techniques to use to get the look she wanted, and it was a multi-step process, but the end result is pretty cool! So far Lexie hasn't convinced her to make her one though, she says it was too much work :) 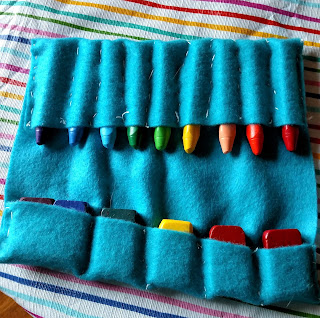 Meanwhile, Little Bit finished the finger knit jump rope she'd been working on. Unfortunately, despite following the directions for determining the length, it was way too short. We may try again at some point, but for now, we moved on to some hand-stitching. With campmeeting coming up soon, and our plans to take a long motorhome trip this fall, I liked the idea of having a pouch to keep her block and stick crayons in. So she chose some felt she liked, and she hand-stitched it into a crayon pouch. I'm so tickled with how well it turned out and she's been having fun being able to carry her crayons around :) 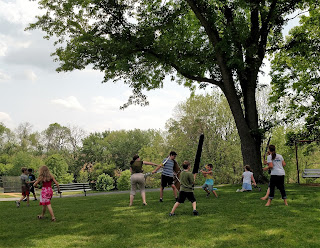 May is the start of park days with our homeschool co-op. We attended some last summer but since we only knew a couple people, and not everyone comes every week, my girls hesitated to join in the group games. Now that they know most of the kids they have no such qualms. One of the main games is "sword fights". A couple of the kids have a whole arsenal of foam swords/weapons and are willing to share, so all the kids get in on it. I love that everyone from the teenagers to the preschoolers get to participate! Once my girls had played a couple weeks and had determined they want to continue, they made their own "weapons" with pool noodles, pvc pipe and duct tape :) 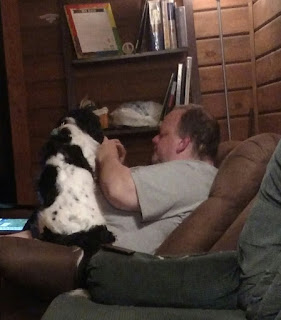 We got to dog sit one of "our dogs" for a week while his family was out of town. Always love having a Cavalier King Charles around again. And he's sweet as can be! In general he's more lovey with the girls and me, and ignores Rodney, but  he was very certain that Rodney should share his chicken with him :) 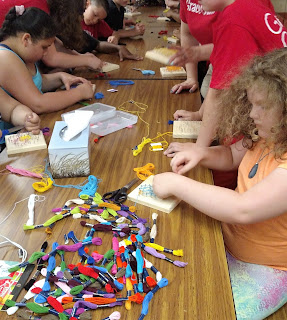 One Saturday afternoon each month during the school year, a group of us from church goes to the Boys and Girls Club downtown and play games in the gym and do a craft with the kids. May's craft was string art. The kids LOVED it!Some of the crafts they rush through and want to go back up to the gym, but this one even the boys asked if they could do a second one. Little Bit had fun with it too :) 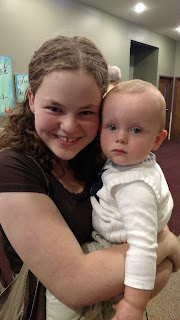 Lexie and Ashlyn take turns teaching in the 0-3 yr old class at church so they get to be friends with all the little ones at church. After church last week Lexie was "helping out" by hanging out with one of her buddies while his mommy was busy, and I managed to snap this picture, isn't he a sweetie!

This past week, Lexie and Ashlyn spent a couple days helping with a project at Rodney's office (photocopying and putting packets together and such), so Little Bit and I got to hang out together. 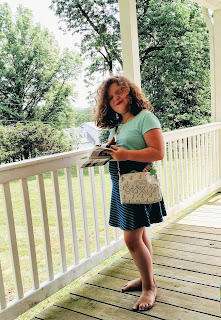 Recently Little Bit has gotten very into looking up bugs, plants etc. to learn more about them. She had started carrying around a whole stack of field guides in her backpack so when I needed to order an "add on" item from Amazon, and therefore needed to order something else to get up to $25, I took the opportunity to order her a combination field guide for our area. She's been having a blast finding things to look up and had to get a new purse at Goodwill that was just the right size to carry her book with her everywhere she goes :) In this picture she was looking up some bug she'd found on the railing, and glaring at me for taking her picture LOL. 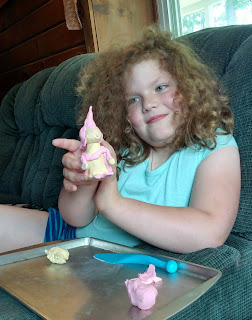 One of the days that Lexie and Ashlyn were at work with Daddy, she spent the better part of the morning sculpting things with clay (Ashlyn's current interest in making the baked clay jewelry has sparked Little Bit's interest in sculpting as well. Her most elaborate sculpture that day was a gnome.