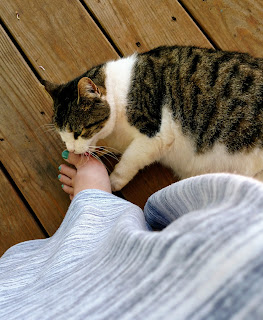 Obviously I'm better at remembering to blog when I'm traveling. So . . . we got home from our epic Little House trip in late September and spent the rest of the month getting settled back into our normal routines.   Tracy, the cat who's been banished to the front porch for repeatedly peeing everywhere but the litterboxes, was very glad to have us home again! Daddy wasn't willing to go hang out on the porch and give her love. Of course, 5 seconds after I took this picture she BIT my toe because I wasn't giving her ENOUGH attention! Silly cat. 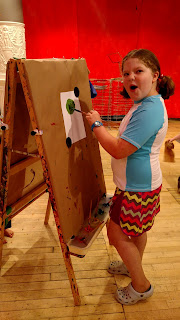 As if we hadn't done enough traveling in August and September, the second week of October we headed to Pittsburgh for Rodney to work and the rest of us to play! Unfortunately, our beloved Carnegie Science Center was closed that week, so we didn't get to go there, but we did go to the Pittsburgh Children's Museum. Lexie and Ashlyn have "aged out" of it for the most part (I think someone their age who had never been there would still find it interesting, but after going so often when they were younger they mostly just found a corner and read a book. Little Bit still enjoyed most of it though. Painting, playing with water, and checking out the new (awesome) chairs they have in the "garage". These chairs are soo cool! I went hunting online to find them. I did, but they're over $700 each, which is beyond absurd for a hunk of plastic!!! Here's hoping someone makes a cheap knock-off LOL. 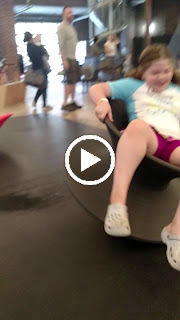 Can't go to the Children's museum without a picture of Little Bit next to the giraffe sculpture :)

We also got lots of swimming time while we were in Pittsburgh. Little Bit hasn't had as many opportunities as her sisters did to practice swimming since she's been tall enough to be in the pool without floaties, so this was a wonderful opportunity. She definitely took some solid steps toward being more comfortable in the water. Wish we'd had longer. 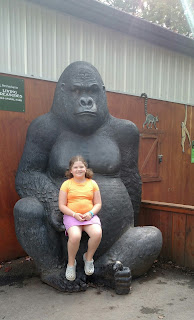 The next day we went to a small zoo near where Rodney was working. It was overpriced for what it was, but we had a fun day. They want you to buy food to feed the animals (can't bring in your own baby carrots, have to buy a bag from them for $4! I don't even know how much the bucket of "nuggets" were. After what I'd paid to get in, I wasn't paying anything extra. BUT because most people do, the animals tend to come running up to the fence in hopes of being fed, so we could see the animals closer than most zoos. 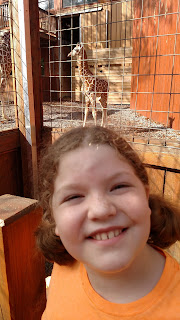 There was a baby giraffe that only came out at certain times, but we managed to get a "front row" spot to see it. Little Bit was over-the-moon :)

They also had "baby animal feeding time". There were several young animals in the pen (a Sabu, and I don't remember what else) but only the camels were still being bottle fed. They definitely knew when it was feeding time. So cute! Little Bit said the camels are easier to feed than calves. They don't butt at the bottles like the calves do. So all in all, it was a fun day :) 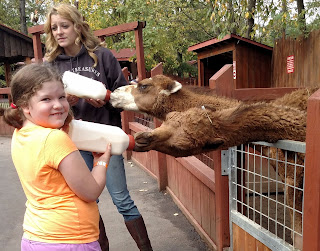 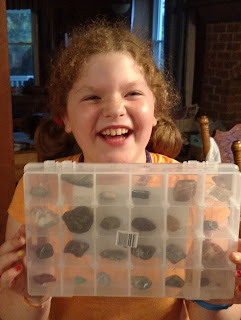 When we got home, Little Bit had a fun surprise! One of my parents' "National Park friends" is a geologist and posts pictures of rocks and minerals on facebook every day. When we were on our motorhome trip, mom was showing those pictures to Little Bit, and let the friend know that her granddaughter enjoyed his pictures. He asked if he could send her some rocks and they had arrived when we got home from Pittsburgh! She was very excited! It was really cool! A box of rocks, each marked with what it is and where it's from!!!

You surely are making lots of memories for your kids. The rocks were a treasure!!