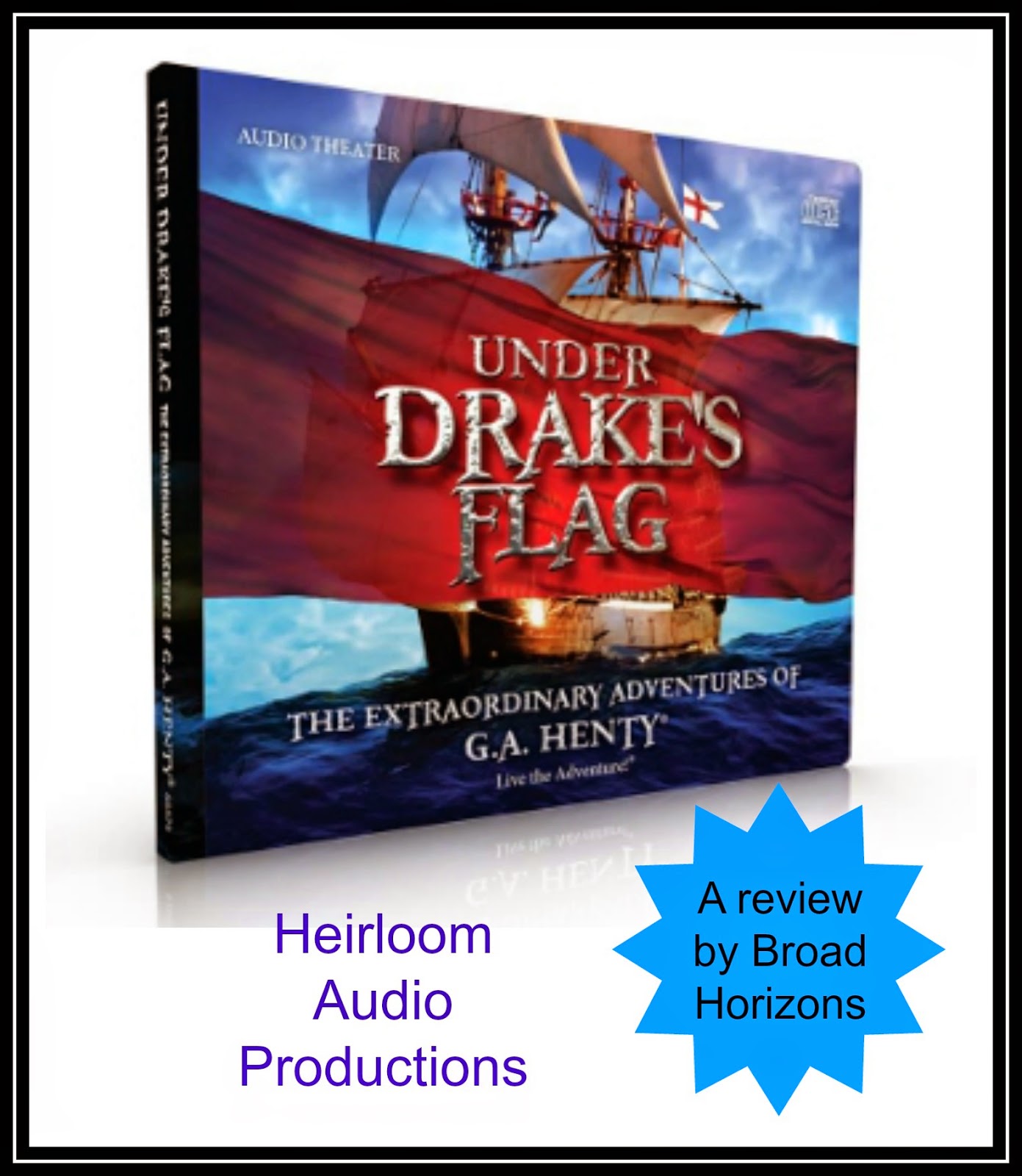 We love audio books and audio dramas! When my girls were younger, I kind of assumed that, once they were old enough to read, we wouldn't use audios as much, but I have one auditory learner and another who is about equal in auditory and visual, so they LOVE to listen to stories! Add to that, the fact that we spend a LOT of time in the car, travelling, and we listen to lots of audiobooks! So, when Heirloom Audio Productions gave us the opportunity to review Under Drake's Flag, of COURSE we said yes!

Under Drake's Flag is an audio drama based on G.A. Henty's book by the same title. We've listened to several of G.A. Henty's books as audiobooks, but this was the first audio drama we've come across. When I read on the website that some of the people who were involved in this production have worked for Lamplighter Theater, Focus on the Family Radio Theater, and Adventures in Odyssey, I was excited. Those are some of our favorite radio dramas and knowing the same people were involved in this one promised it would be a winner. And we were not disappointed!

We received a 2 CD set, including a study guide. We also received a .pdf download of a more comprehensive study guide.The 2 CD set, along with $70 worth of free bonuses, is available for $29.95 plus shipping and handling.

This audio drama is a full 2 hours long. It tells the story of a boy named Ned, who sails with Sir Francis Drake. This is a story full of suspense and adventure as Ned faces dangers at sea and is captured and finds himself facing the Spanish Inquisition. All these adventures help Ned to grow from a boy to a man, and teach great lessons on how to face adversity.

We received these CDs right before leaving on a trip that included a visit to a Maritime Museum, and tour of  a reproduction of a tall ship. The timing was perfect for enjoying this Maritime adventure story!

This audio adventure is great for ages 6 to adult. My sensitive 5 year old was busy watching a video while my 11 year olds and I listened to this story and I think that worked out well. The dangers Ned faces would have been abit too . . . suspenseful for her. I think her sisters would have enjoyed it at her age though, so as with so many things, know your own children and decide accordingly.

My daughter, Lexie said she likes that the kids were "good guys" instead of getting in trouble like often happens in stories, but it still had adventure and was interesting. Ashlyn was glad that "people who I liked didn't die", her number one complaint about "exciting" stories, hee hee.

In addition to the CD adventure, we also received a downloadable study guide to go along with the adventure. We opted to simply enjoy listening to the story and discussing the things that caught our attention, rather than using the study guide. However the study guide could be a valuable resource for a family looking for a more structure "unit study" utilizing this audio adventure, or if your children will be listening to it without you, and you want to "review" it with them.  Each set of questions includes:


The last few pages of the study guide consist of a 3 part Bible Study based on the character lessons drawn from the story. And finally, a list of additional resources for learning more about Sir Francis Drake.

Because we were traveling, and aren't currently studying this time period, we simply enjoyed listening to an exciting, and uplifting, well produced audio drama. I am definitely making note of it to re-listen to when we DO study this time period in history in another year or so.

As I mentioned at the beginning of this post, we have listened to several of G.A. Henty's books as straight audiobooks, and we enjoy them. However they are LONG books, and can be abit daunting. This audio drama is an IDEAL "introduction" to Henty's books, and once you're hooked, you may find that your family enjoys reading or listening to Henty's books (most of which are available in the public domain) as well.

And, exciting news that I received as I was working on this review! Heirloom Audio Productions are working on a new audio drama called In Freedom's Cause, based on the story of William Wallace and Robert the Bruce. This is scheduled to be released this fall (projected date: early November)!

Find Heirloom Audio Productions on Facebook:
Under Drake's Flag
In Freedom's Cause

All prices and information are accurate at time of posting.