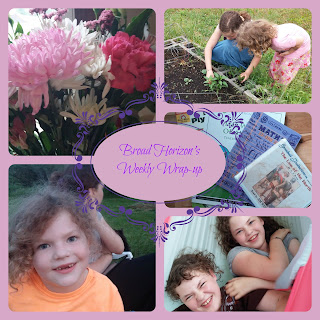 So apparently this summer is the summer of two week wrap-ups . . . no real reason . . . I can't even say we're so busy I haven't had time to write . . . maybe it's because we are having a nice quiet summer and there's not a whole lot to write about. I kinda like that.

The weather's been surprisingly wet and not swelteringly hot for July. I like that too.

Ashlyn's been doing lots of gardening. It's kind of doing "too well" the plants are so big they're crowding each other in the raised beds. But we enjoyed the beets that she dug up last week, yum! We're also enjoying the herbs from the herb beds, but sadly, the Japanese beetles seem to really like the basil. Sigh . . . this year is the first time in years that I've seen TONS of Japanese Beetles. Must say, I haven't missed them, UGH! Ashlyn quickly learned to hate them too. 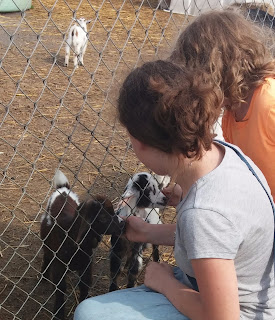 Little Bit is my . . . includer. . . off and on for several years now, we've done "dates" to allow each of the girls to have one-on-one time with one of their parents. Little Bit loves the idea of getting to choose to go someplace special or fun, but inevitably she invites her sisters to come with her. Kind of defeating the whole reason the "dates" were set up. But it makes her happy, so whatever . . . This time, Little Bit chose to go to Oley Dairy. An ice cream shop that also has a petting zoo. 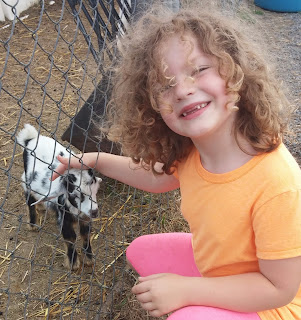 This time I don't think we ever made it past the first couple pens because . . . BABY GOATS! To be fair, I think at various times all 3 girls DID walk around the rest of the pens, but rather quickly gravitated back to the baby goats because . . . they're babies, and they were friendly! The only challenge was keeping the big goats from butting them out of the way.

When we did walk around the rest of the pens, there was a turkey OUTSIDE the turkey pen. I asked Ashlyn to run inside and let them know that it was out. But they told her it's actually a WILD turkey that has been hanging around, trying to get in to their turkeys. How funny is that!

Otherwise, a pretty quiet couple of weeks. Little Bit rediscovered her magnatiles and has spent countless hours building "cages" for her plastic animals with the magnatiles.

The library reading program, though the prizes this year are . . . very disappointing (last year the raffle options included a science kit that had a microscope, etc. This year the raffle options are . . . not educational) Whereas last year the "token" prizes were lots of stickers and such that Little Bit, at least, enjoyed. This year everything is superhero themed. An "I like to read" sticker seems alot more, not only appropriate for a library, but also gender neutral/wide appeal than a spider man eraser. However . . . despite grumbling actual prizes, the girls are still having fun writing down the books we read.