I'm hopelessly behind, but going to try to touch on at least a few highlights from October before moving on to November . . . . 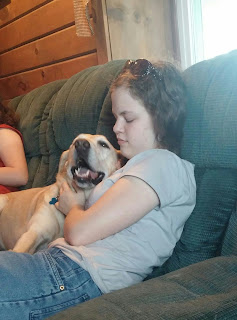 When we got back from the motorhome trip we got to dog-sit one of Ashlyn's favorite doggy guests for a weekend. Maggie likes us, we let her on the furniture and play frisbee with her until she's exhausted :) 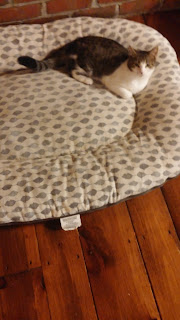 Tracy (the cat) no longer attacks Maggie like she did when she had kittens, and mostly they ignore each other (the other cats wisely disappear to the garage, behind furniture, or outside when dogs come to visit). BUT Tracy LOVES Maggie's bed and claims it as her own whenever Maggie's at our house. Since Maggie gets to be on the sofa (during the day) and in Ashlyn's bed at night, she doesn't seem to mind letting the "enemy" use her bed :) 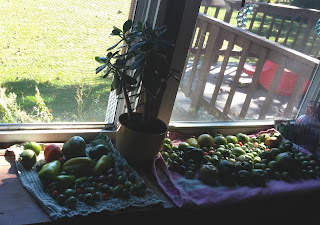 October brought the season's first frost warnings, so Ashlyn and Little Bit went out and harvested the rest of the tomatoes & peppers and we spread them on the windowsill to ripen. I have to say, more than I expected did, indeed, ripen. It's been nice to have a steady but gradual supply of ripe tomatoes for the lats month or so :) 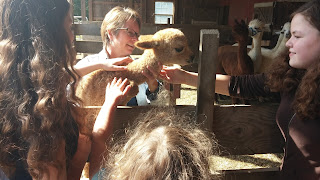 The homeschool co-op that we joined this fall had a fieldtrip to an alpaca farm. All the alpacas are adorable, and some were super friendly. But the coolest was a baby who was only a few days old!!! Soooo sweet! 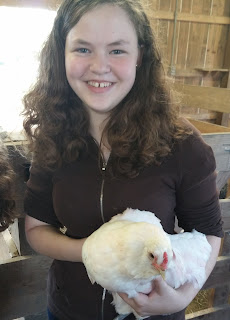 They also had chickens. The younger kids were trying to pet the chickens but the chickens weren't cooperating real well so, with the owners' permission, Lexie caught a chicken for the kids to pet. It doesn't show very well in the picture, but the chicken had a kind of pinkish tint. They said a few weeks earlier they'd had a "circus camp" on the farm and had colored some of the animals and some of the dye hadn't worn off yet LOL. 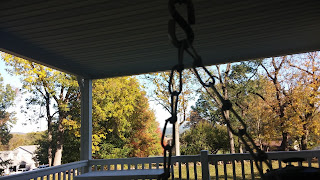 I didn't use my porch swing much during the heat of summer, but it's the perfect place to enjoy my morning coffee (or afternoon coffee) in the spring & fall. LOVE IT!!! 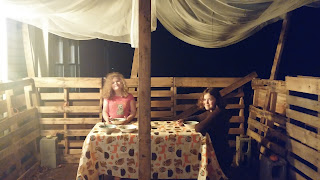 I asked the girls if they wanted to try their hand a building a sukkah (temporary shelter) for Sukkot this year. They spent the better part of 2 afternoons working with the pallets we had in the shed and some old boards and such . . . the plan was modified a few times to get it to work, but with some sheer curtains draped over the top, and cement blocks strategically placed to make sure the pallets didn't fall over, it turned out pretty cool. Wish I'd remembered to take daytime pictures, but the nighttime one turned out ok. It was fun to enjoy dessert on the deck, under our sukkah, while watching a huge, beautiful full moon :)

A friend from the church we attended when we lived in Maryland had sent me information about a Christian magician who was going to be at their church. We left right after church and headed down to hang out with friends before the show. They were taking the teenagers can collecting that afternoon so took Lexie & Ashlyn along while Rodney, Little Bit & I went to the church early to help set up for the magic show (or more accurately, refreshments after the show).  The friend who was organizing it all has a daughter Little Bit's age who's very outgoing, so as I expected, the two of them hit it off instantly and ran off to happily play until the show started. We had a great time visiting with friends, and the magician was pretty cool! Typical slight of hand and illusion but he used it to create object lessons about various Bible concepts :)

The next day was our church's second annual Trunk or Treat. I'm not a fan of Halloween, but this is such an awesome ministry. We host the Trunk or Treat in a school parking lot in downtown Reading. The school is near the boys & girls club facility where we provide crafts, activities and snacks to kids on Sat. afternoon once a month, so many of the kids are the same. The school principal and several teachers had trunks as well as church members, friends, and some local businesses. This year a police officer brought her police car and had it set up as a trunk from Zootopia (which would probably have made more sense to me if I'd seen the movie, but I thought it was great for kids to get to interact with a police officer in a fun, positive way :)  United Way had several trunks and in addition to the candy that everyone handed out, they also brought books, sorted by grade level, to hand out to all the kids. Little Bit was happy to get an Amelia Bedelia book (and surprisingly one she doesn't have), I was more excited to know that the local kids who probably have very few, if any, books of their own, were all getting a book too :) Lexie & Ashlyn came planning to help wherever needed (so did I, but they actually had quite a bit of help this year so I didn't do much, which was fine, it allowed me to take Little Bit around to the trunks and then let her play with her friends while I could keep an eye on her). 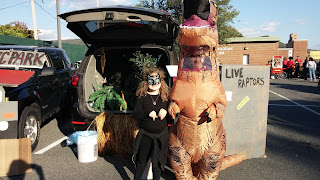 Lexie spent most of the time at the soldier table (we send the leftover candy to the soldiers overseas so we have a table with posters for the kids to sign to send with the candy), but one of the trunks had a Jurassic Park theme including a fancy inflatable dinosaur costume, but the guy wearing the costume was getting hot & thirsty (we had AWESOME weather that day!) so they were looking for someone to take a turn in the dinosaur and Lexie agreed. Doesn't she make a cute dinosaur next to Little Bit the cat? :) She was most amused when a little boy in a DINOSAUR costume was afraid of her :) Other kids happily ran up to her to get their picture taken with her though :) As has  become an annual tradition, our pastor invited the whole church to a bonfire at his house on the last Sat. night of October, which happens to also be the night of the King Frost parade in the town where they live. We look forward to the time with friends (and Little Bit looks forward to getting candy at the parade) but Ashlyn also looks forward to getting to snuggle with their dog Sadie. Sadie's old and deaf and sweet as can be and she and Ashlyn adore each other :)

We again, had great weather! And a good evening!

The next day, much to Little Bit's delight, her Sabbath School class took all the kids who could say the books of the Old Testament to Sweet Frog as a reward (they learned the books by singing a song that talks about ice cream, so ice cream seemed like the logical reward). She'd been looking forward to it forever and then a few days before, the teen "Stage and Screen Review Club" that Lexie and Ashlyn joined in our co-op group, sent out information about a performance of a Little Women Musical that they were going to. Needless to say, Lexie and Ashlyn wanted to go to that, but Little Bit would have been devastated to not get to go to Sweet Frog with her friends. Conveniently, even though the co-op we joined is in the next county over, and most things, including this play, are about 30 min. from us, the mom who's in charge of the Stage and Screen group lives near us, so she agreed to pick Lexie & Ashlyn up and take them with her and her daughter to the play. So everyone had a great day!

We finished off October by meeting friends at a park to play all afternoon on the 31st. These friends are a group of moms I know from an online group, and it's a bit of a drive, but there are toddlers for Lexie and Ashlyn to happily chase (plus the park we go to often has people walking their dogs, so Ashlyn has to meet every dog that walks by), and one of the families has a girl near Little Bit's age and they have a BLAST together! They bring their dolls and I don't know what all and play together happy as clams the whole time we're there.
Posted by Unknown at 6:24 PM