Wrapping Up Most of November

Hey look, I'm getting caught up!!! I make no promises that I'll STAY caught up LOL.

I'm also realizing that I haven't taken many pictures recently. So guess I'll just have to tell you what we've been up to recently . . .

After church we headed downtown to pass out lunches, hats and gloves, and hot chocolate to the homeless. We passed out over 100 lunches (and 50 cups of hot chocolate) and could have given away so much more if we'd had it. Each week, once all the lunches are passed out the pastor gathers everyone into a circle to pray, and invites anyone nearby to join us if they want. Not only did several people join us this week, but 2 or 3 of them took a turn praying as well.

Once we got home afternoon the girls and I headed to my parents house. Ashlyn was happy because she got to play with my brother's 3 german shepherds. 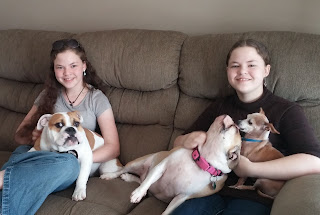 Sunday we headed to NC to visit my friend, V. She's been inviting us to come visit ever since they moved there a couple years ago, and we finally found at least a couple days that would work. 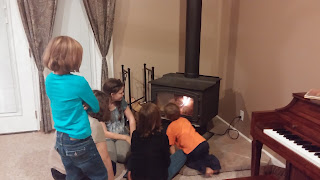 The first evening, it was chilly, so V was trying to start a fire in the woodstove, but not having much luck. The kids decided to try their hand at it after she gave up (and was going to wait for her husband to get home), and they were successful! And very proud of themselves :)

The weather was GORGEOUS while we were there! So we took advantage of it and spent the first morning at a nearby park. 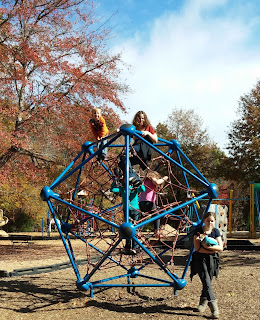 After hiking around the lake, we headed to a playground. It has this awesome "spider web" thing to climb on that Lexie had to try out. V managed to convince Ashlyn to at least stand near the spiderweb for a picture (Ashlyn agreed as long as she could hold Wiggy).

Lexie also kept V's youngest (age 4) happy by pushing him on the swing and generally being his buddy the whole time we were there. He was so cute.  "Wexie, will you pway a game with me?" She played tag (made more fun because it was in the house and Charlie (the dog) assumed they were running for his benefit and kept tripping her), board games, and took him out to play on the swingset. Which at one point, involved allowing all the kids to declare her to be a chocolate bunny and "eat her" . . . but at least the kids were all getting along (big sisters don't always like to include little brothers). Naturally, when she came back inside and told us they'd declared her to be a chocolate bunny, Ashlyn, V, and I promptly started singing the Veggie Tale "Bunny Song" hee hee. 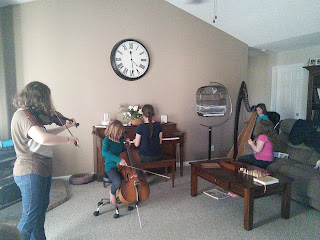 V's 8 yr old had her very first cello lesson while we were there. Lexie was super excited to get to play with a cello, and taught her to play twinkle twinkle. Then everyone played Twinkle together. Lexie on her violin, K on her cello, Ashlyn on the piano, and E on her harp. It was super cool, if not "great music" :)

Since Monday night was the "Super Moon", we had a bonfire and made smores and looked at the moon. It was very pretty, though I couldn't tell that it was that much bigger than other nice big full moons. 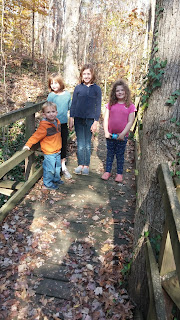 On Tuesday we went to check out a fort nearby. There wasn't much there but it was another gorgeous day. There was a small playground so the kids had fun playing on the playground for awhile and then we went for a short hike on a trail through the woods. Much to the delight of the kids, there were some "side trails" (that might have just been deer trails) that we let the kids explore. The woods were small enough that they couldn't get lost, and the ids were loud enough that we could hear them the whole time, so it was nice to sit in the woods and talk and listen to the kids laughing and having fun :)

Wednesday afternoon we drove back to mom & dad's house. Celebrated Dad's birthday that evening, then came home on Thursday.

Friday we had another park playdate with the same group of friends we met at the end of October. Another gorgeous day (I was plenty warm in a long-sleeve t-shirt) and the kids had a blast. 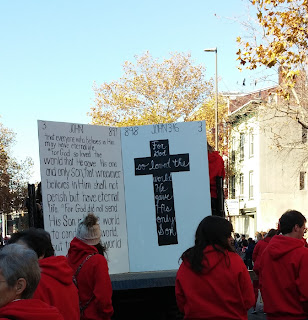 Yesterday was the Reading Holiday Parade. Our church had a float in the parade so we walked (or rode) with the float and handed out candycanes.

The theme was storybook characters so our float was Bible stories. Some of the talented artistic types in our church made a huge "Bible" out of plywood to have in our truck. And some of the kids dressed up as Bible characters and rode in the truck. 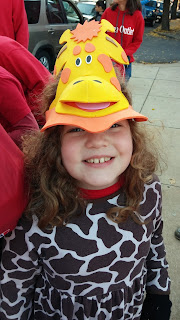 Little Bit dressed up as a giraffe. And Lexie resurrected the generic "Bible character" costume she made to use when I was leading the little kid Sabbath School class at church, and needed her and Ashlyn to occasionally play the part of various Bible characters. 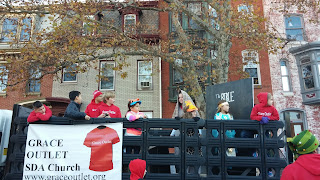 While it was chilly waiting for the parade to start, it wasn't bitterly cold, and was plenty warm once we were walking. 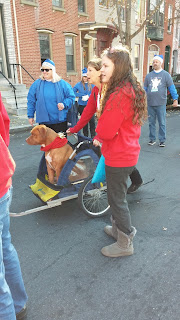 And then, much to Ashlyn's delight. Some friends joined our float with their 2 person recombant bike and, riding in a trailer behind . . . their DOG!!!! He was a super laid-back dog and happily rode the whole parade route. Ashlyn stayed next to him, pretty much the whole time. Some of the kids very happily took turns riding in the 2nd seat of the bike. So they were a welcome addition to our float all around :) Ashlyn hasn't stopped talking about what a sweet dog he is. To be fair, he WAS very sweet. A lab/pitbull/boxer mix. He was a big boy, but very well behaved.

When we passed out lunches, etc. downtown last weekend, after we'd given away most of the "winter wear" our pastor was talking to young homeless guy, and ended up giving him his sweatshirt that has our church logo on it. As we were walking the parade route, we saw the same young man, wearing his "new" sweatshirt. He asked if he could walk with us since he was wearing his sweatshirt that matched ours. I think he even passed out some of the candy he'd been given while standing on the parade route :)