Homeschool wrap-up for this week 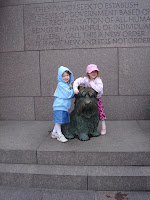 We didn't do much this past week. And I'm really not sure why, girls were busy playing, I was busy decluttering . . . they were happy without "school" so we went with it LOL. We did remember to practice with the glockenspiel mallets and they thoroughly memorized the rhyme for it. They now are very convinced that they must go through the entire rhyme before playing the glockenspiel EACH time, and have done their best to teach everyone else the rhyme as well LOL.

Friday morning's ice thawed enough that we could still have our Kindermusik class, and we got to bring our glockenspiels home, so they were very excited about that. They're also learning the A note (to add to high C).

When talking about the President coins (my dad has been teaching the girls the Presidents, in order, using the new President metal dollars as they come out), A decided she wants to go see how money is made. Since we were already planning to go to Sesame Place (near Philly) a few times this summer (we bought season passes last summer that are good throughout 2008) it should be easy enough to include a trip to the Mint in one of the trips, especially since mom & dad are retiring so we won't have to try to fit it in around their work schedule.

We took advantage of the GORGEOUS weather on Sabbath (amazingly different from the freezing rain of Friday, we were plenty warm in sweatshirts, and the girls, with all their running around, eventually were too warm in sweatshirts & were just wearing their l-sleeve shirts) to visit some of the memorials in DC. A few weeks ago when we visited my cousin to meet her new baby, we read a Clifford book she had that was about Clifford visiting DC, and in that book, it talked about the dog statue at the FDR memorial, so we went to that one, which I'd never been to. Winter isn't the ideal time to visit it, since there are a bunch of fountains that are all drained for the winter, but the girls were appropriately excited upon finding the dog statue (which I hadn't told them we were seeing, on the off chance that the Clifford book was wrong and there wasn't actually a dog statue LOL). We got several pictures of the girls posing with various statues throughout the memorial. They also had great fun climbing on some big stone blocks. We also had a couple brief conversations about "poor people" since the memorial includes statues of men waiting at the unemployment lines and such.

Then we walked around the reflecting pool (which lived up to it's name beautifully and was reflecting the Washington Monument perfectly, the girls were excited to see the "flection" of it, L noticed it w/o us pointing it out) to the Jefferson Memorial. I figured they'd find it more interesting than Lincoln, since Jefferson is a president that they "know" from Papa's drilling of the first 4 presidents. The video playing in the visitor center raised lots of questions about war, which reminds me, I need to see if the library has any good preschool level books on the revolutionary war &/or the first few presidents. Anyone have any good recommendations?

Last night & again tonight Daddy's been playing Sim city and the girls have been helping them. I'm sure there's some educational value there somewhere, if we look hard enough, but since it's not a game I've ever played, I don't know what LOL. If nothing else, it's "quality time" with Daddy LOL.

A actually chose Monopoly when we played games today. I was surprised since she generally complains when L chooses it, and only plays w/ L & me about half the time. And somehow something "clicked" with her and she was doing much better at counting out money, we get added practice with math since they try to keep at least one of each denomination of bill, so even if they HAVE a $5, they don't want to give it up, so would rather figure out & use a $1 & a $4 to pay their rent. Tonight she figured out on her own that she could pay $6 rent by giving me 2 $1's and 2 $2's, which I thought was rather impressive LOL.

A quick note on this unit of homeschool, the handwork is supposed to be making a variety of gourd instruments. I got the book out of the library & I think it would be a fun project, for the girls & their Papa, once he's retired. So, we're holding off on that for right now and will re-visit the idea once Papa's retired and has some time (and we'll also make sure that either we, or Grandpa grow the necessary types of gourds this summer so we don't have to buy the gourds to build the instruments LOL). So, we're mostly enjoying the books and art pojects from this unit (since nature focuses primarily on creating a Sanctuary garden, which is, again, something I'd like to do eventually, but not when the ground is frozen & not at a house that we're getting serious about selling, so that portion is also being "deferred" until sometime in the future.
Posted by Sweetpeas at 6:58 PM

Email ThisBlogThis!Share to TwitterShare to FacebookShare to Pinterest
Labels: Homeschool

Hiya! You won my calendar holder on my blog giveaway! I emailed you, but please send me your address info when you get a chance...