I'll start this week's post with a few pictures from last week. I still haven't remembered to take pictures of the girls' closet (probably because most of my blogging is done when they're sleeping). But I did take a couple pictures of the pantry counter. I discovered that it's almost impossible to get pictures because it's such a narrow room, I can't get the camera back far enough to take a picture of the whole space, but here are a couple pictures at least. 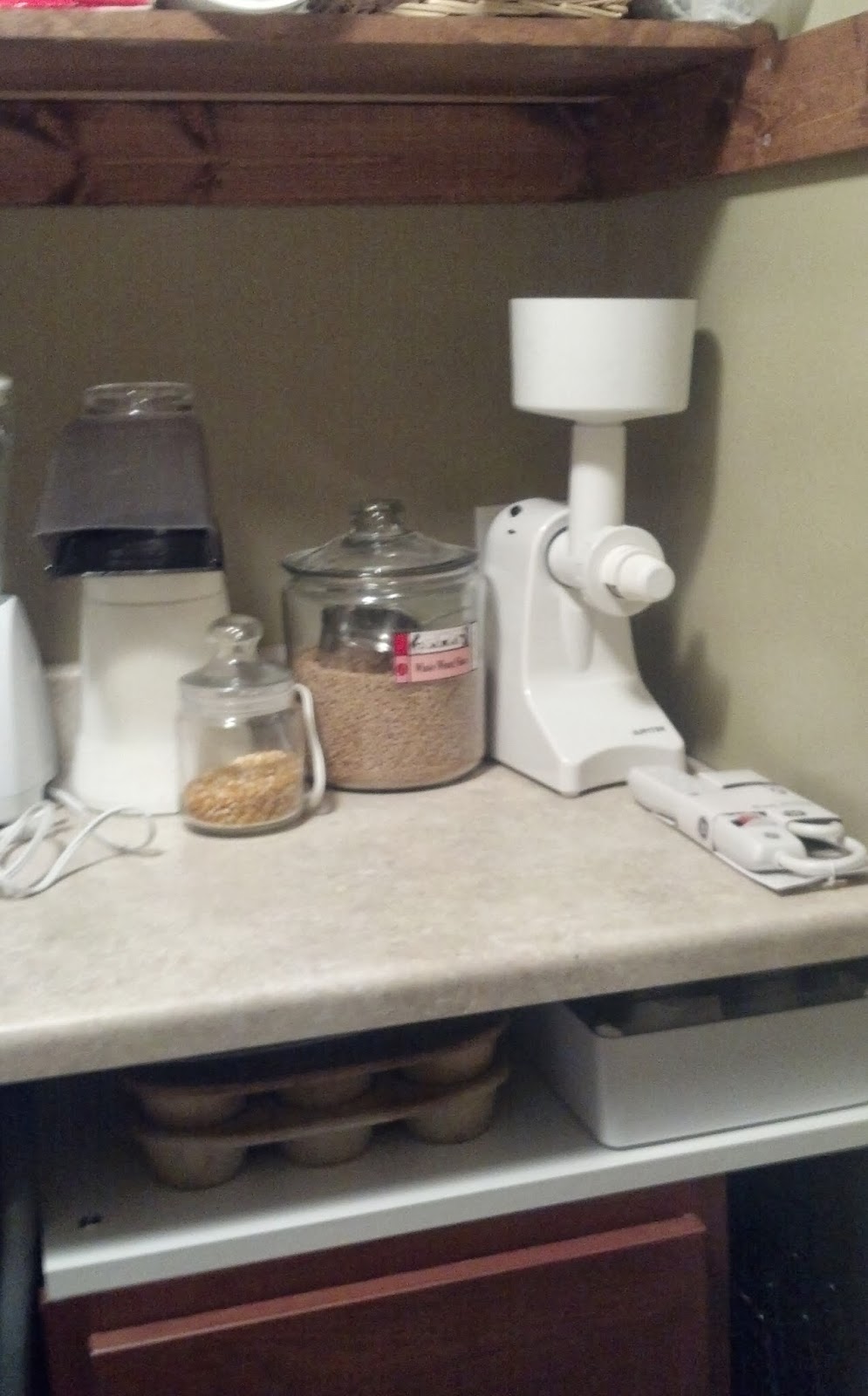 This shows part of the counter, with appliances and related stuff, on top. Because the counter is high enough to accommodate the folding chairs, it left space above the cabinet that the previous owners left. So that creates a small "shelf" perfect for my stoneware muffin pans and the box of accessories for the food processor :) We also decided to set the cabinet a few inches away from the wall to make that shelf wider, and give room between the cabinet and the wall for trays and such. 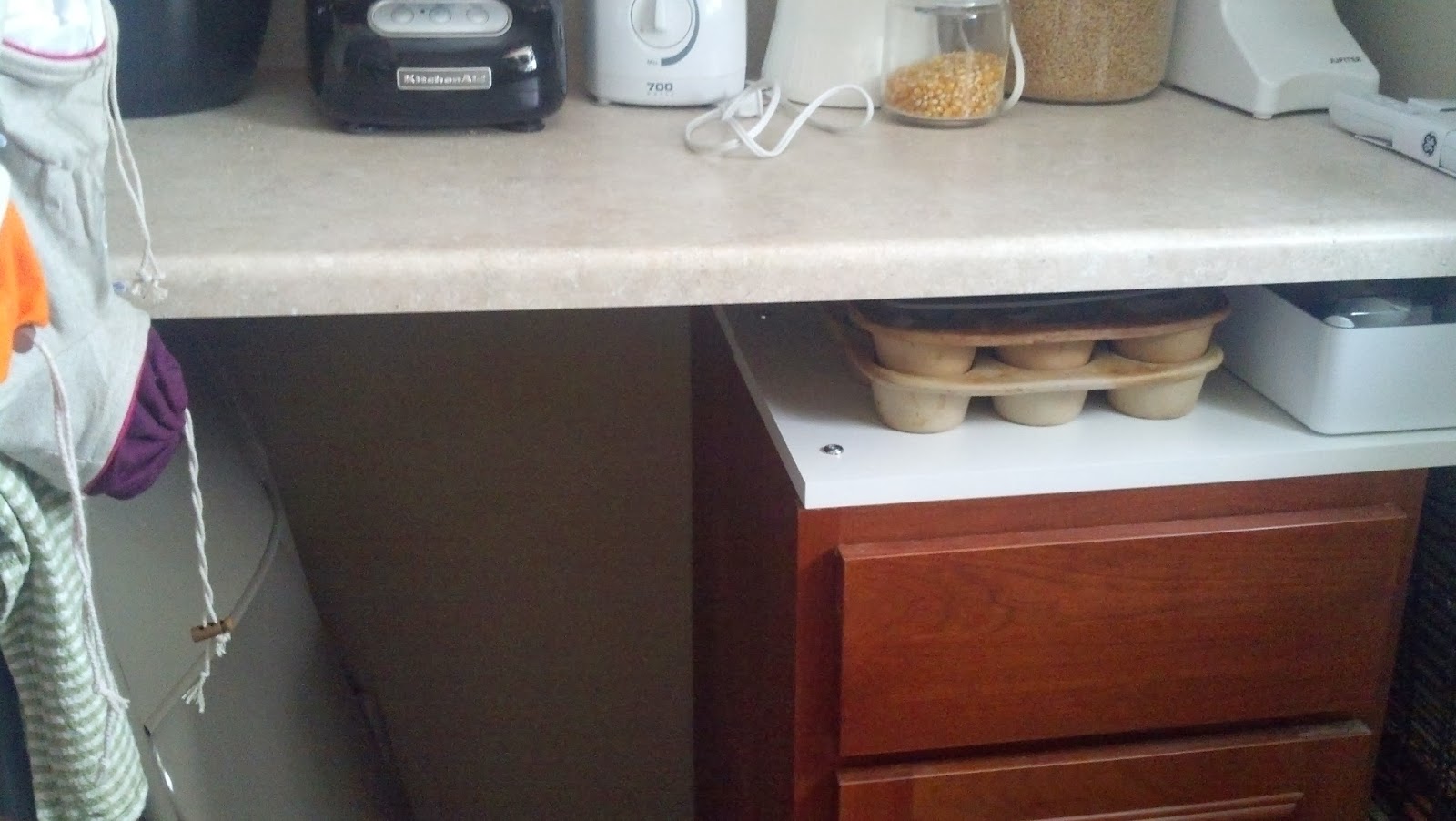 This picture kind of shows the space for the folding chairs. The bags hanging on the left side of the picture are hanging from the wire shelving and hold garlic and onions :)

The other project from last week, that I forgot to mention, was curtains in the living room. Last winter, I realized that it would be a good idea to have insulated curtains for the living room, but it was never a priority during the summer, then winter hit with a vengeance . The best I could do, with my complete lack of "building" skills, was to take some down comforters, and use large safety pins to hang them from hooks that were already on the top of the window. I could definitely tell the difference it made, but it wasn't very user-friendly, and in time, the safety pins bent and didn't work anymore. 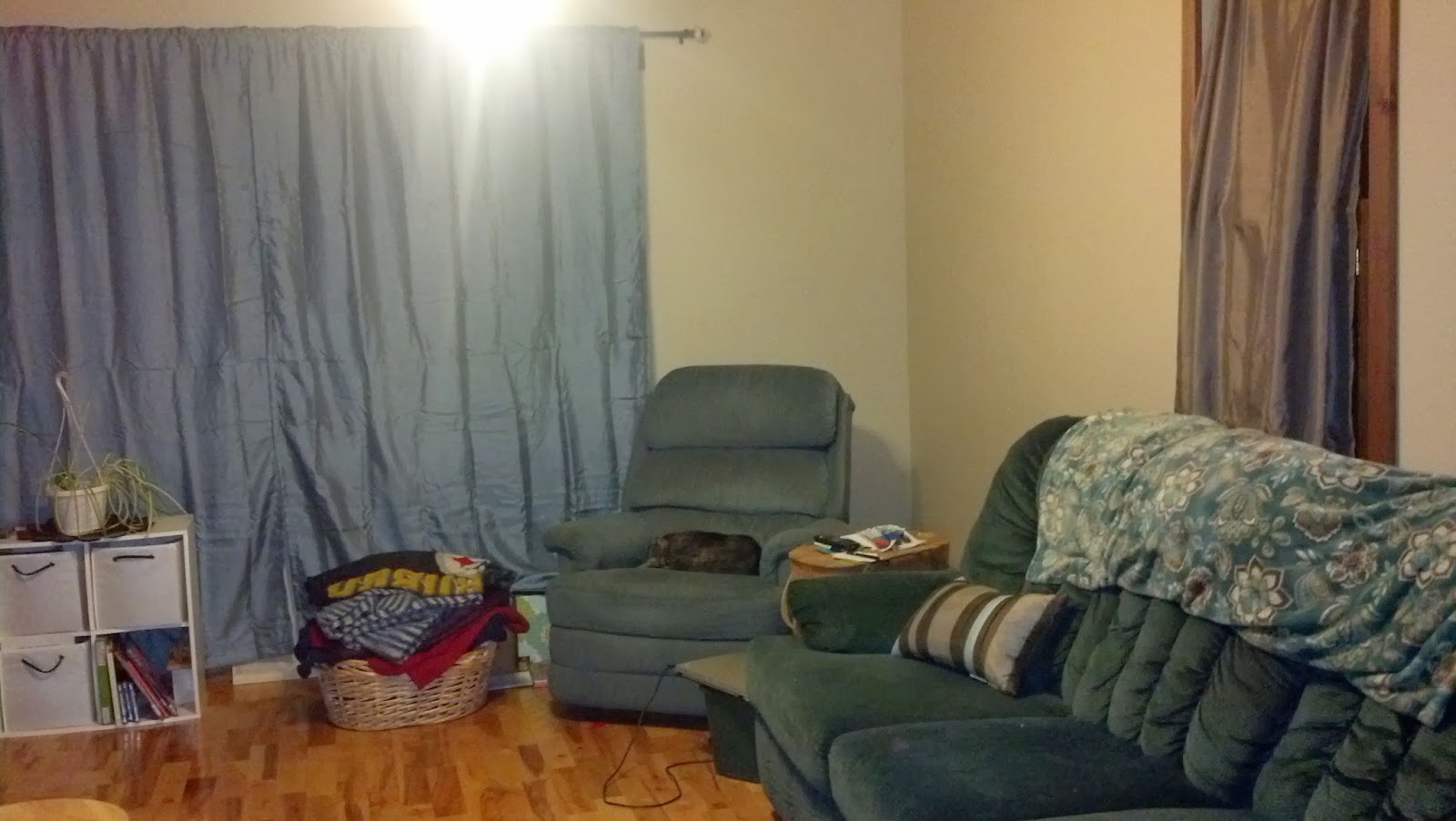 So, when my parents were here, shopping for and installing insulated curtains, was high on my list. So, when the snow allowed, mom and I went shopping :) Finally, we found exactly what I wanted (aqua-ish curtains) at a great price, on a clearance rack, BUT there was only one pair. I needed one pair for the big front window and, at the bare minimum, one additional panel for the front door (yes, it's weird to hang a curtain over the front door, but we usually use the back door and when I sit in that blue recliner I can feel the wind blowing through the cracks around the front door. It occurred to me that I could hang a curtain over it, using a long enough, high enough, curtain rod that, when the door is used, the curtain can be completely out of the way of the door). I did have a curtain on the smaller window behind the sofa that would have worked. Then, we found an identical pair, but in a grayish taupe color and decided it would work to use that color on the door and small window. So we had windows.  At another store, we found the throw and pillow that perfectly pulled together all the colors, woo-hoo!!! Now I want to find more blankets in coordinating colors to use in the blanket  basket instead of the hodge-podge I have in there currently, but at least we have insulated curtains up.  We also got insulated curtains for the girls' room and the school room (but again, I keep forgetting to take pictures.

While we didn't get much new snow this week, the old snow is still very much there, and too deep and icy to be worth playing in, so we spent our week indoors. For art one day, Little Bit made a "harp"/"guitar" from a tissue box and some rubber bands, and promptly started putting on "shows". She and Lexie spent quite some time "rehearsing" her show, in which she sang along with several "Sherrif Callie" (a Disney Jr tv show) songs, before calling Ashlyn and I, and several dolls, to be the audience. I videoed part of it, though it was pretty hard to keep up with her LOL. Now to see if I can figure out how to post it here. . . 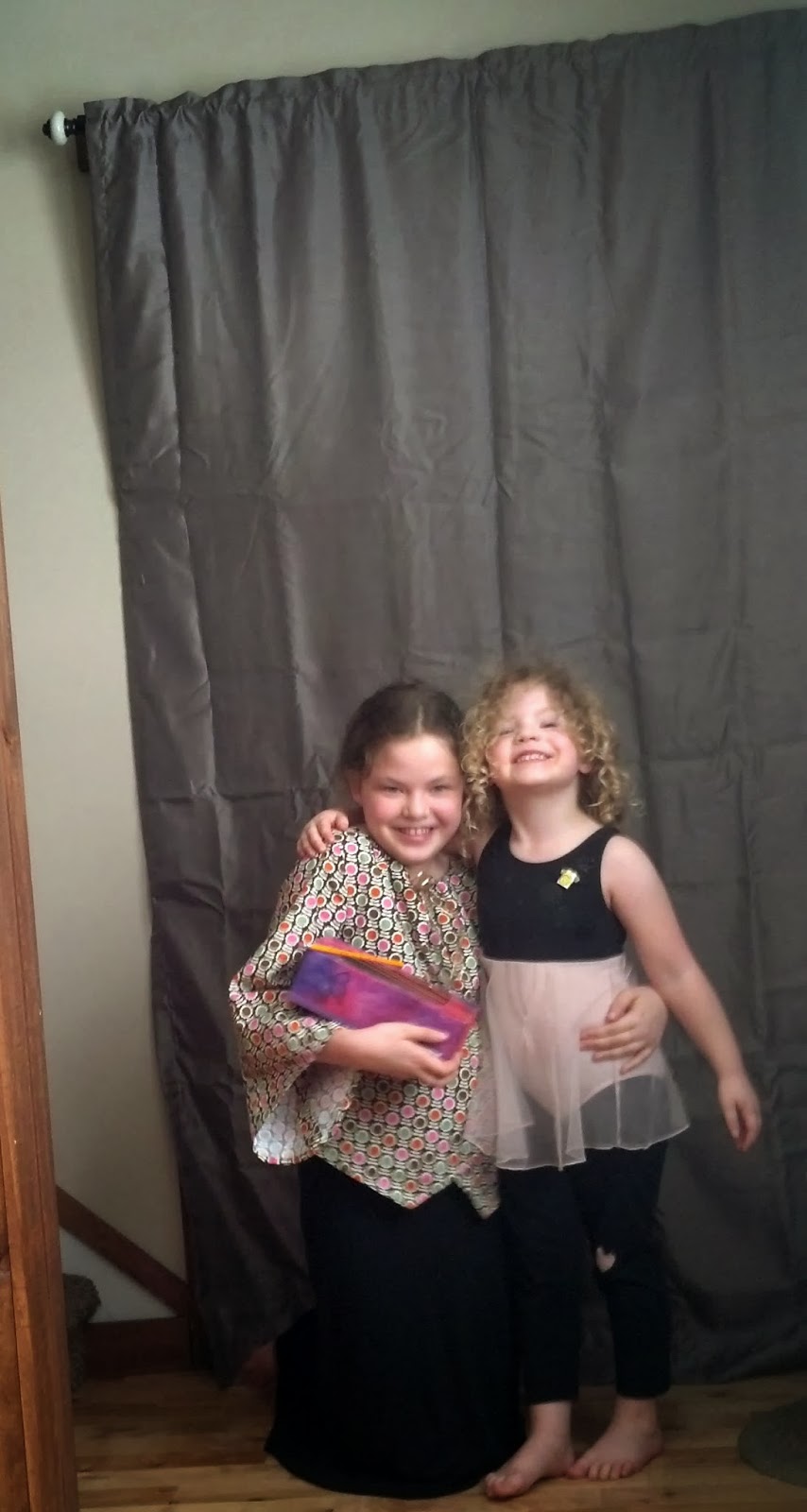 After her "show", she was available for photos, and Ashlyn humored her :) This also shows the curtain on the front door :) AND Ashlyn is wearing the blouse that she and Mama made :) 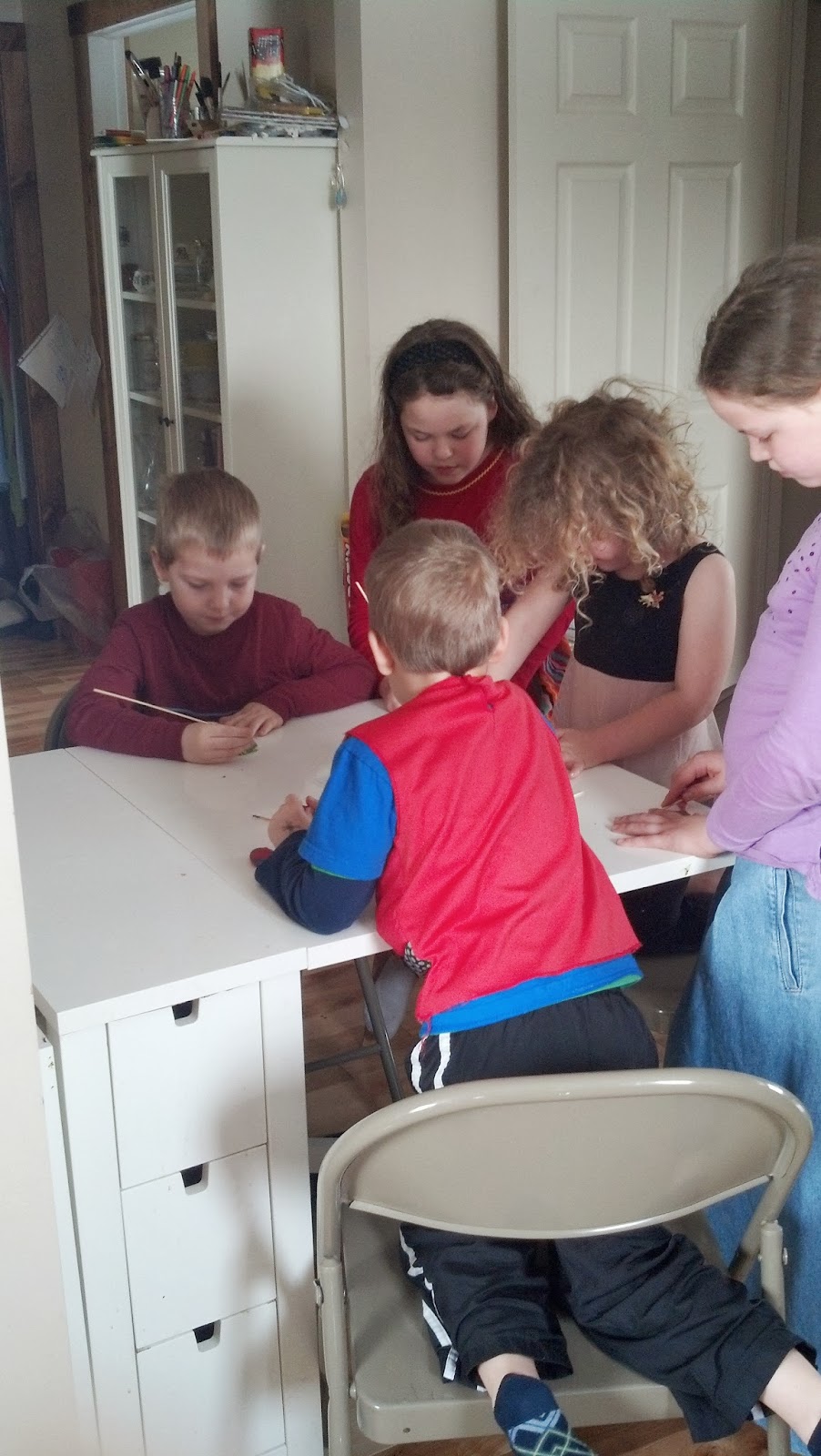 We've been enjoying learning about ancient history (after much internal debate, I've decided to use pieces of several curriculum options and essentially write my own curriculum. My hope is to make it available to others once we have worked through it and caught any major kinks. . . we shall see . . .).  This week we were primarily talking about Ancient Egypt, but we touched on other ancient writing forms as well, and, since all that darn snow makes it pretty hard to go out and gather reeds to make papyrus, we contented ourselves with trying our hand at cuneiform on clay "tablets". 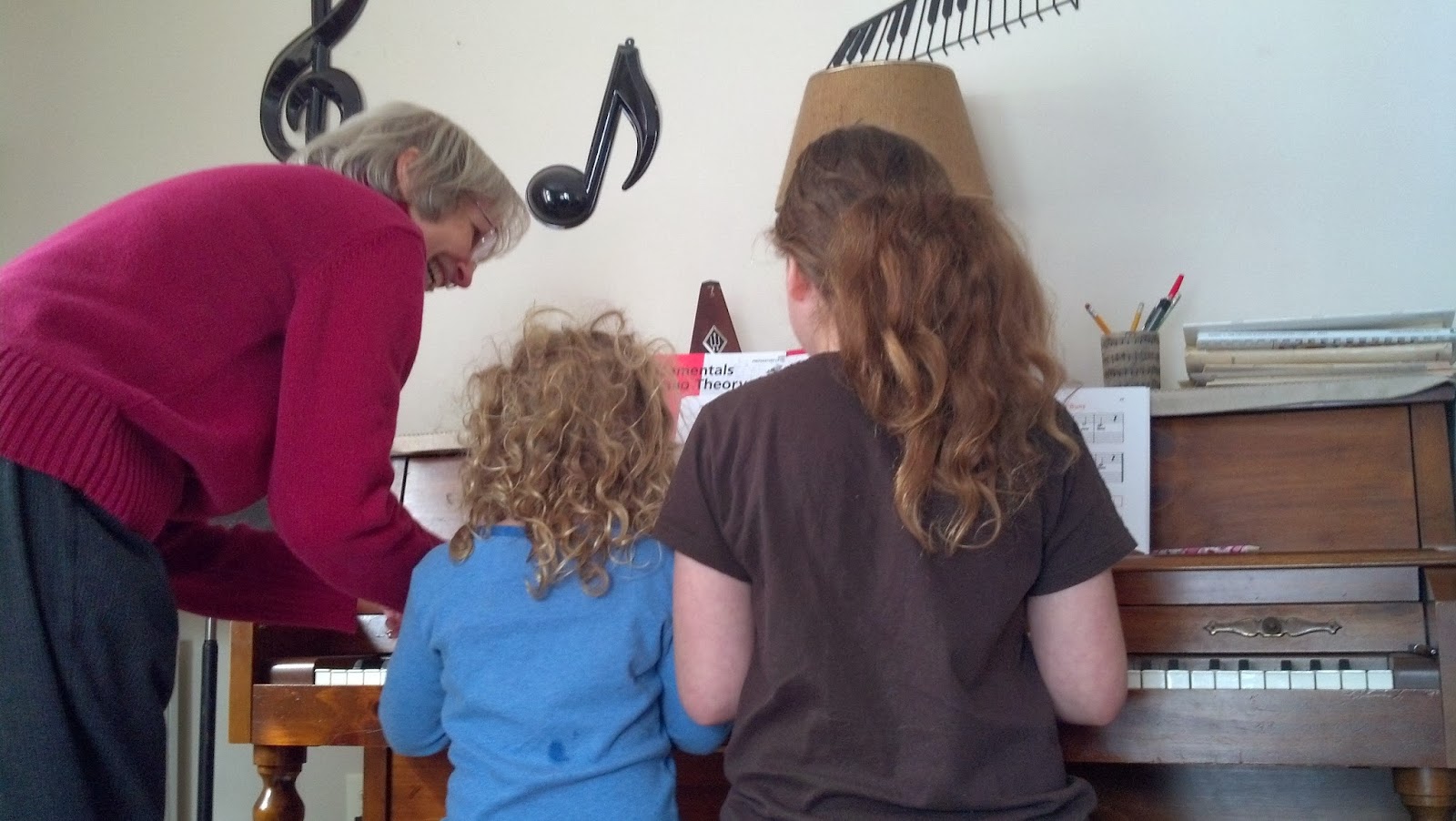 The big girls were very happy to be able to go to music lessons this week. We missed last week because of the snow, and in the meantime, while ordering Ashlyn's Book 2, I'd ordered some theory books, and books for reading music notes, for both of them (at their teacher's request), so they were excited to discuss these new books with her.  As an added bonus, Miss Pat had Little Bit "help" Ashlyn by playing the accompaniment part (just the same note at a constant rhythm) on one of her songs :)

That afternoon, after stopping by the church to make sure the Sabbath School room was set up, we went to a small, nearby museum. They have an exhibit on ancient Egypt, which the big girls enjoyed, and Little Bit endured, thanks to some hands-on activities that were scattered through the exhibit, and then we headed upstairs to the traveling exhibit area, which currently has a Dora and Deigo exhibit. At first I wasn't sure she liked it, but finally she started to get into it, and wanted to stay longer when it was time to go. I assured her that we can stop by again while that exhibit is there. So that might become a regular part of our music lesson day for a few weeks, since that's the day that we are typically in that part of town :)