Sunday was, of course, the Super Bowl, which, quite frankly, none of us cared much about, but it was a good excuse to order pizza and have soda, as a treat and see if the commercials were amazing (the ones I saw weren't).

Monday we got our biggest snow, so far. A good 10+ inches! But more than the quantity, the exciting thing, for the girls, was that the temperature was hovering just below freezing so it wasn't too bitterly cold to be outside AND the snow was packable. They spent a good part of Monday, and some of Tuesday, building ice caves, although of course, being girls, they called them Princess palaces or somesuch LOL.  Conveniently, their chosen site was right outside the bathroom window, so I was able to snap some fun pictures from the warmth of the house :) 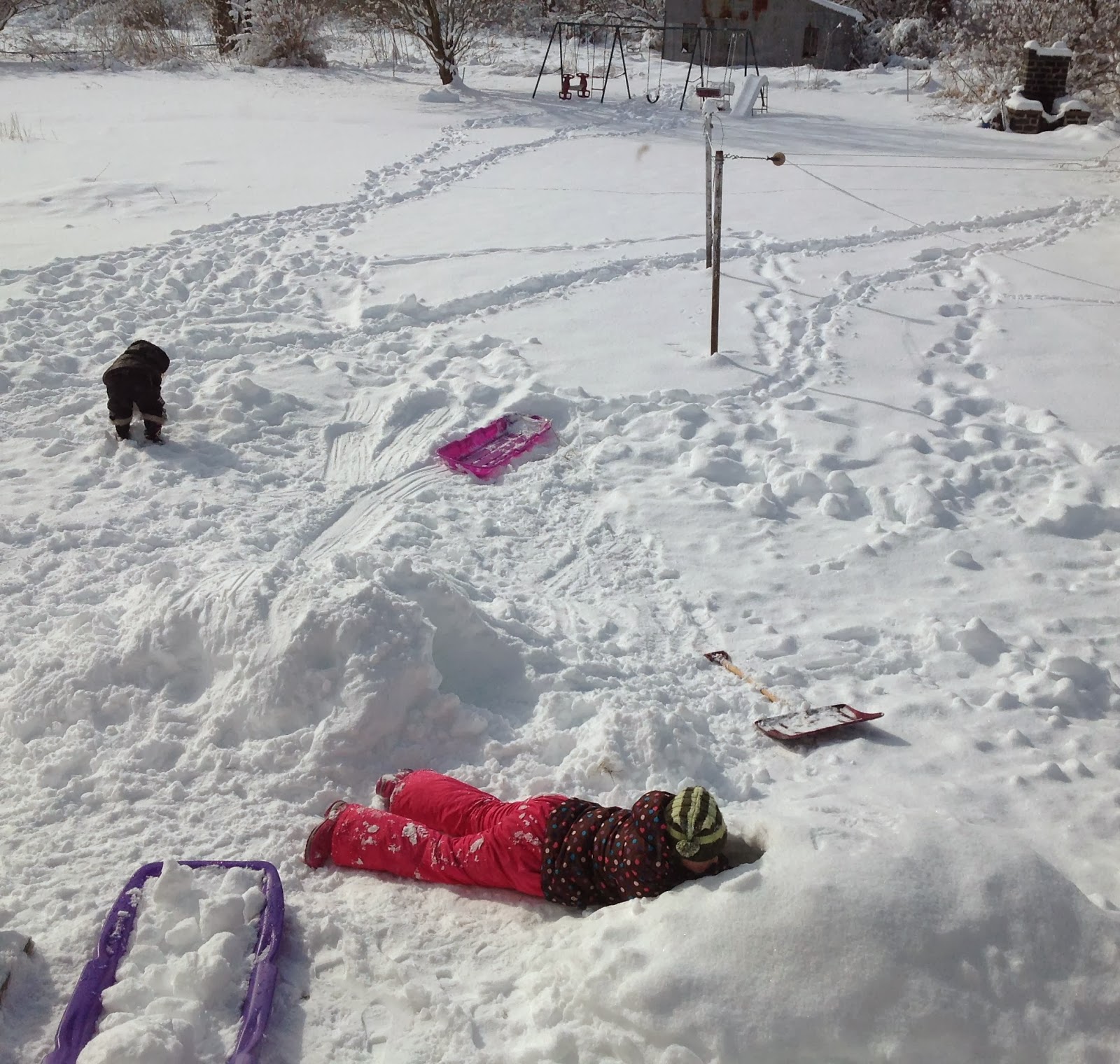 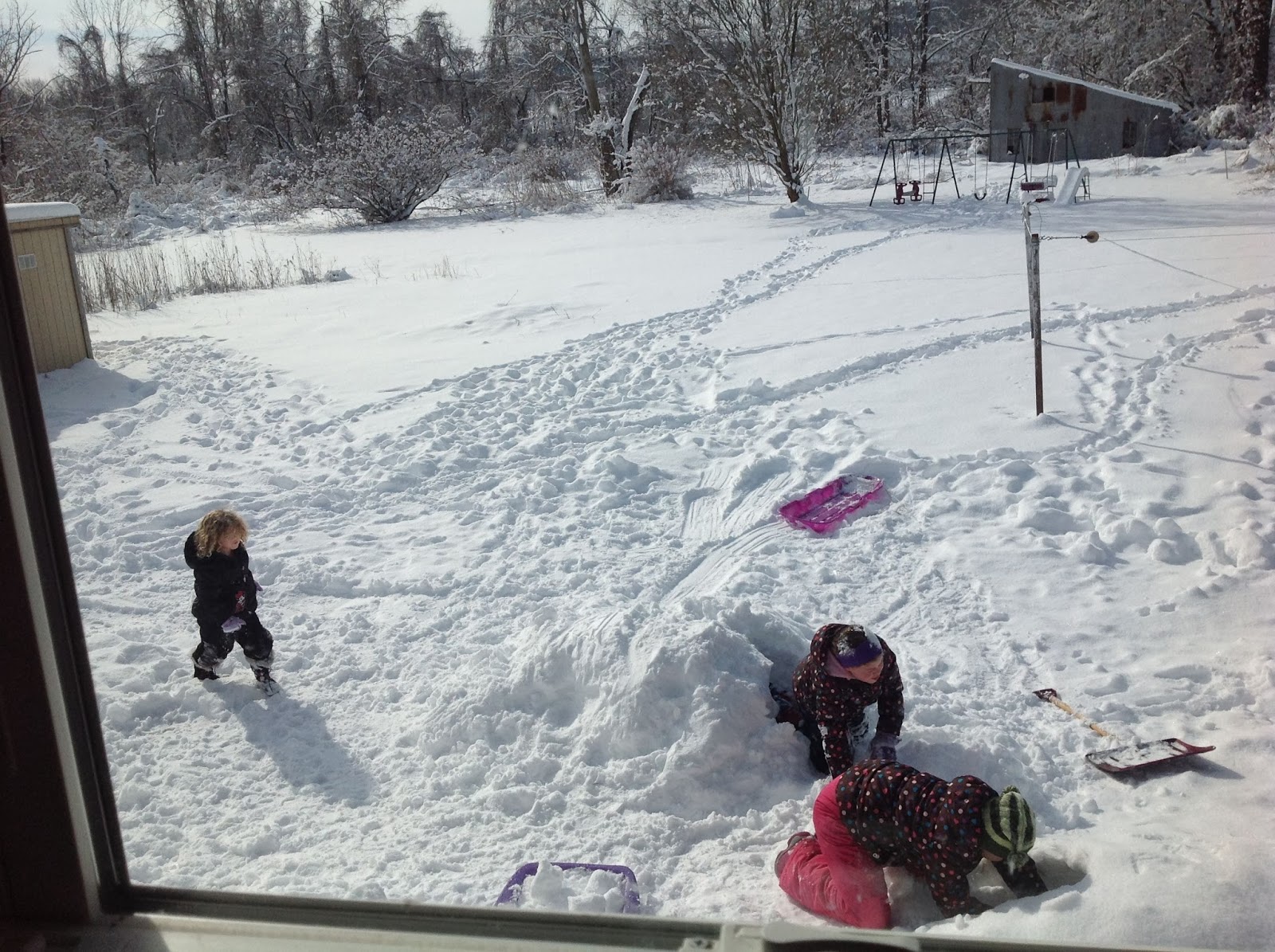 Needless to say, there was lots of INDOOR time as well (especially after we got a layer of ICE on Wednesday, making the snow alot less fun). Lexie spent that time, designing her own Indian (as in, from India) costume out of playsilks over her colonial shift :)

And the closeup of the "jewelry" . . . safety pins and beads :) She was pretty proud of herself :) This was a week of new curriculum too . ..  which is kind of odd, in February, but that's the beauty of schooling year round, we start things whenever it works for us . . .

History:  After spending the past 3 years on American History, this week we jumped WAY back in time and started Ancient History.  I started with this curriculum, but after using it for a few days, decided it just wasn't giving the detailed tie-ins between secular and biblical history that I really want to be a focal point in studying Ancient History, so I also got Truthquest Beginnings. This is the curriculum we've used for American History the past 2 years, so I knew the author gives lots of great commentary, and also lists tons of resources. I'm finding that, not surprisingly, because many of these earliest ancient history resources are focusing on Bible stories, the resources listed, aren't as likely to be in our library, but the plus-side of that is, we can move more quickly if we're not trying to read quite so many books on each topic LOL.  For this first year, we're combining both curriculum, since I have them both, and I like some aspects of each. . .

We also finished up our bedtime Bible study, on Proverbs 31, and were just starting to discuss what we'd do next, when I decided to get the above mentioned, Truthquest. Since this first year is focusing so strongly on Bible history, especially in her commentary, I decided to use that for bedtime Bible at least part of the time. It will let us move more quickly through the "Bible story" part of history.  So that's 2 subjects that are new. In math, we got hung up on memorizing times tables. The girls can calculate times tables with no problem, and can't see the value in memorizing them (in reality, they had all but about 5 memorized, but still . . . ) but then they were struggling with division because of NOT having the times tables memorized, so we were at a bit of a stalemate. . . they weren't REFUSING to memorize them, but they didn't see the value, so it wasn't as easy for them as it would have been if they' truly been on board. Finally, a few weeks ago, a friend mentioned that her daughter liked a book called Times Tales. I'd seen it recommended many times before, but it's sooo counter-intuitive to me, I can't fathom how it works . . . BUT . . . the day that my friend recommended it, the Times Tales website had the first half of their video  free to watch online (for 2 days only), so I had the girls watch it, and they LOVED it, so I ordered the DVD. All our snowy weather gave us plenty of time to watch the video, but I had to laugh when I glanced over to see HOW the girls were watching the video, both laying on the sofa with their heads twisted at the same weird angle, both kicking their feet in the air, silly kids! Of course, as soon as she saw me with the camera, Little Bit got on the sofa and was doing the same thing, but since she was in her underwear (yes, temperatures in the teens, our thermostat set in the 60s, and she's running around in her underwear half the time, sigh . . . ) I didn't take a picture of that :)

Our final new curriculum for this week is spelling/language arts. The girls have been asking to learn more about spelling, capitalization, and punctuation for awhile now, and I finally decided on the Simply Charlotte Mason's Spelling Wisdom, but we're also looking at each lesson for punctuation, and capitalization and such. I originally liked the idea of just pulling a paragraph from other things we were studying, and looking at it for spelling, punctuation, etc, but in the end, this curriculum won me over because it's intentional about making sure it covers the 6000 most used words in the English language.  So far the girls are loving it, and moving quickly through the first book :)

My parents came up on Wednesday evening, to help with some projects around here. All 3 girls had fun helping Papa paint their closet pink . . . this week he's going to work on putting shelves in said closet.