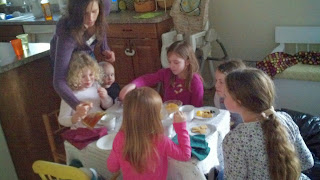 Whew! What a BUSY and FUN week we had!!!

Sunday we were still at my parents' house, so the girls and I headed over to my friend Vicki's house for the afternoon. She has 3 kids too, and the world's most tolerant dog. All the kids had a blast! They even got to have a tea party :) And Vicki and I could never run out of stuff to talk about, we've been trying since we were 13 :) (and that's just when we finally got to live near each other, our parents were friends before we were born, we have a picture of us together when she was a baby and I was 1, when I say lifelong friends, I mean it!).  As we were driving home from Vicki's, the girls all agreed that "we should visit them every week". I think that 3 hr drive might be a bit of a deterrent but I sure wish we could! Fun times!!! :)

We got back to Mama and Papa's in time for the big girls to help Mama make German Cheese Dumplings, my great grandmother's recipe, but it's kind of like this, only there's also bread crumbs, browned in butter, in the filling, and after they're boiled, they're covered with an onion, sour cream gravy (and probably other differences too, I've never actually made them).  The girls didn't remember having them (it's been a couple years) but LOVED them, so now I figured THEY can learn to make them and it will just skip my generation :)

Monday we decided to go tour the book publishing company where Mama and Papa worked (technically they're retired, but they still go in and help out sometimes). The girls didn't remember touring the actual PRINTING part of it, so we went and did that again. We use the ends of rolls of paper for our art paper so they thought it was pretty cool to see how big those rolls are to start with :) 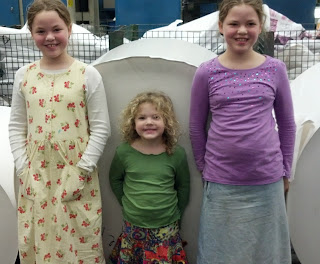 While we were there, they got to try out Mark's Segway, which they thought was great fun! Mark said they did pretty well at figuring it out too. They were just barely heavy enough for it, so sometimes it didn't register when they leaned, but overall they did great for a first try. Lexie said the easiest thing was to go in circles LOL. 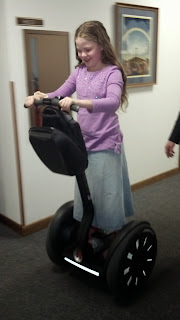 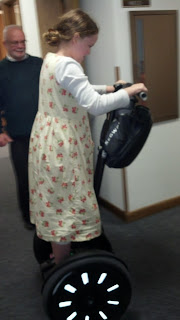 Monday evening Daddy came down to Mama and Papa's house and Tuesday morning we headed out for Thanksgiving. Tuesday was a short drive (and despite predictions of an inch or more of ice, all we got was rain).  We drove to Rodney's sister's house, and spent the afternoon with her, then had supper with some friends from when we were in college.

Wednesday morning we headed out for the longer drive to TN. It snowed off and on pretty much the entire drive, but never stuck to the roads and traffic wasn't bad, so all in all, a good trip.  We made good time (and had left as early as possible to get as far south as possible before the snow hit (rumor has it it was in the 60s in Boston, I told Rodney next year we should go NORTH, it's warmer! LOL). 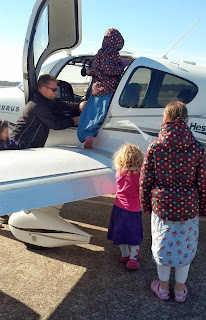 The rest of the week, we spent with Rodney's cousin and other relatives. I don't think I'd seen Rodney's cousin, Terry since our wedding, and hadn't met his wife or daughter (the big girls had, when they traveled to Indiana with Grandmom and Aunt Lynette when Little Bit was a baby). And I hadn't seen the aunts and uncles in forever either. We had a great time! Terry's a pilot, so Thursday morning we headed over to the airport. He showed the girls the "little" plane, and then took all 5 of us up in the bigger one. It only seats 6, including the pilot, so Lexie got to be co-pilot. 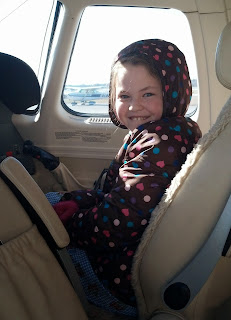 She and Ashlyn were SOOOO excited to get to fly, they made sure EVERYONE knew that they had been terribly deprived and hadn't gotten to fly in any kind of plane since they were 18 mo old and they weren't old enough to remember that so it DID NOT COUNT! And life is just SOOO unfair LOL. . . 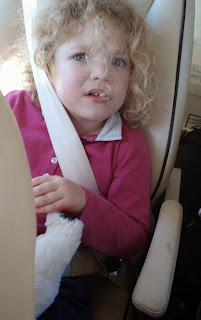 Little Bit was more nervous about it all, and even MORE nervous when she found out that she would be sitting next to Ashlyn instead of with me. So the pre-take-off picture I snapped shows abit of terror LOL. Once were were flying and she realized it wasn't scary, she loved it too.

It was a beautiful clear day so we could see forever from up in the sky, it was amazing!!

Then we headed back to the house for more wonderful food and visiting with family. 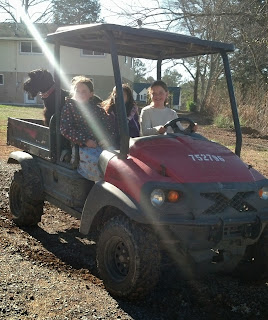 Friday we relaxed and hung out. Terry was pulling some fence posts, so taught the big girls how to drive their golf cart, so they could haul the fence posts back to the shed after he, Rodney, and Uncle Gary pulled them. The girls LOVED that! Lexie, Ashlyn, their cousin, and Diamond the dog, spent ALL day driving the golf cart around :)  Now they're lobbying for us and/or Papa to get a golf cart too LOL.

Little Bit quickly declared the golf cart too scary and too bumpy (can't say as I blame her, with her sisters driving LOL), so she spent the day in the house with Lisa and I.  All the girls joined us to go pick up a Christmas tree and once we got lights on it, all the girls came in to help decorate it.

We all had a great time and were sooo sad to say goodbye to head back home yesterday. We left amid many invitations to come back anytime and whenever Lisa or Terry would say "you all have to come back", their daughter, M would say "for Christmas!" :) 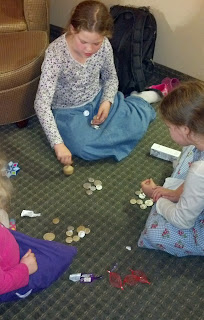 In the midst of all our family Thanksgiving fun, we couldn't forget about Hanukkah. The first year we celebrated Hanukkah, to add to the fun, some Hanukkah fairies came to visit, and we've continued that tradition (they sometimes show up during other Biblical holidays as well). This year, they appeared on Wednesday morning, and brought a tiny travel menorah so we would have it, ready to use Wednesday night. That worked well, because even though we didn't get back to the hotel each night until bedtime, the mini menorah candles (birthday candles) burned out quickly enough that we could light it, and let them burn out while we finished up stories. Each night the girls also got gifts for Hanukkah. Thursday evening they theoretically got "dreidels and gelt" but since it seems repetitive to get a dreidel every year, I decided to modify things slightly and just have that night's gift include a game or games. This year they got some games I picked up while we were in Williamsburg. Interestingly, one of them, Teetotum is almost identical to Dreidel only with numbers instead of Hebrew letters. So the girls had fun playing that with their chocolate coins (gelt). 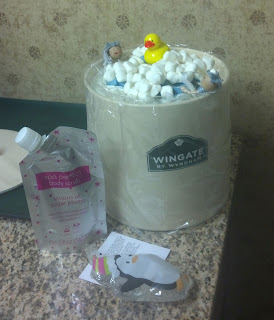 It's been abit challenging to come up with fairy ideas that worked in a hotel room, but I managed. My favorite, which worked really well in the hotel room, was the bubble bath!  Friday night, the girls' Hanukkah gift was bubble bath and bath scrub (the first Hanukkah was about cleansing the temple, our bodies are the temple of the Ruach Hakodesh (Holy Spirit), so one night's gifts are things for cleaning our bodies. Since Friday night is "bath night" that was the logical night for that gift), so when they woke up Sabbath morning they discovered the fairies had "borrowed" their new bath stuff and were taking a "bubble bath" in the ice bucket. Apparently, when fairy dust hits bubble bath it turns into miniature marshmallows :) Though Little Bit insisted that "that is NOT possible!" (apparently all the OTHER stuff the fairies do is perfectly logical?).  It was very nice of Target to have little "rubber ducky" lip gloss things in their dollar section right now, the ducky was just the right size for the fairies' bath, and the girls were "needing" some new lip balm with the dry winter weather anyway :)

I didn't get a picture, but another night the fairies left gel "snowflakes" on the hotel mirror, that we could take back off and take home with us, so we can use them to decorate at home too :)

Sabbath we drove to Mama and Papa's house and today we're heading on home.

Busy, BUSY week, but so much fun time with friends and family!