We had snow on the ground the ENTIRE week! That almost NEVER happens around here, and certainly not before Christmas! I have to admit, I'm really glad it's a rare thing here. Part of our normal school routine, on days when the neighbor boys join us, includes outside time, and getting everyone in, and out, of snow clothes isn't something I love LOL. Also, since it was kind of weird snow . . . not packable, so no snowman making or snowball fights . . . we don't have hills for sledding . . . the kids had to be somewhat creative in how they played in the snow for so many days in a row, but they figured it out. . . there was a layer of "ice" somewhere in there, so they'd clear the snow down to that, on the driveway and then "skate" on it, or the big girls would slide the younger ones around in the sleds on the "ice". So it worked . . . but from that standpoint, I wasn't sad to see it go with the weekend's warmer temperatures. I do wish everything had shifted a week, so we'd had snow on the ground for Christmas, it sure was prettier :) 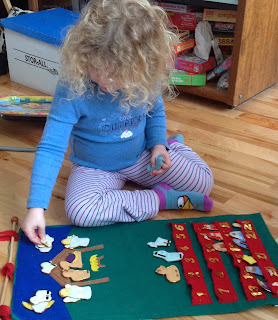 This year Little Bit has really loved the Advent calendar. It's a felt calendar that I got from Oriental Trading (probably for a couple dollars) when the twins were babies or toddlers. I think it's been used every year since we got it (we have various other Advent calendars and books that I rotate, but this one has been a constant). This year, above and beyond adding a new one each day, Little Bit has spent hours just playing with it like a felt board. Since OTC doesn't still sell them, you could easily make something similar, with craft felt and velcro dots. In fact, we've lost a couple pieces, and the numbers have come off some of the pockets, so I'm thinking once Christmas is past, I'm going to re-do the numbers with puffy paint, and make new figures to replace any missing ones with felt and velcro dots. Another thing that she's gotten alot of use out of recently is the new kids app from YouVersion.  YouVersion is the app I've used on both my phone, and iPad ever since I first got a smartphone, so when they came out with a free kid app, I downloaded it onto the iPad to see what it was like. It's just a "electronic book" that tells a few basic Bible stories, but something about it has completely captivated Little Bit, she listens to those stories over, and over, and over, that has helped her to learn the Baby Jesus story more thoroughly. 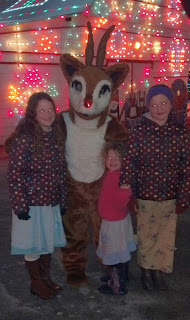 Thursday evening we met my parents at a Christmas Lights place called Christmas Village. I can't imagine why people wait in line for HOURS on the weekends, or travel from far enough away to have to get a hotel in order to see it, I much prefer some of the other lights things we've gone to in the past, but it was fun to see Little Bit enjoying it. I think the snow on the ground really added to it too.
This week was our first week of a new chore system - watch for a whole post about that later this week. 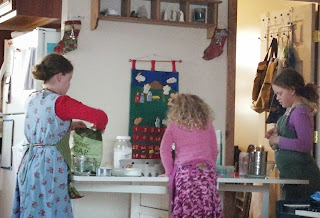 The girls decided to spend one whole afternoon baking cookies. They chose the recipes, and made the cookies without any help from me (except helping them find the ingredients and equipment that aren't things we use regularly enough for them to know where I keep them, like white flour, and the flour sifter). I put the cookies in the oven, and took them out, since the baking stones are still abit heavy for the girls, and at the end, some of the final clean-up fell to me. But otherwise, it was pretty much a mom-free project.