Sunday was a music recital for Lexie and Ashlyn.  Their teacher had e-mailed me in advance and asked if Little Bit would like to be her "helper". So as soon as we got there she went over to find out her job.  Miss Pat needed someone to draw numbers out of a basket to decide which student would play next and had a stool next to her where Little Bit happily sat through the whole recital.  I wasn't quite sure what to do with myself, being able to just sit and listen to the recital without keeping Little Bit quietly entertained, but she did great, playing with the number cards that had already been drawn and just sitting there . . .sniff . . . my baby's growing up! 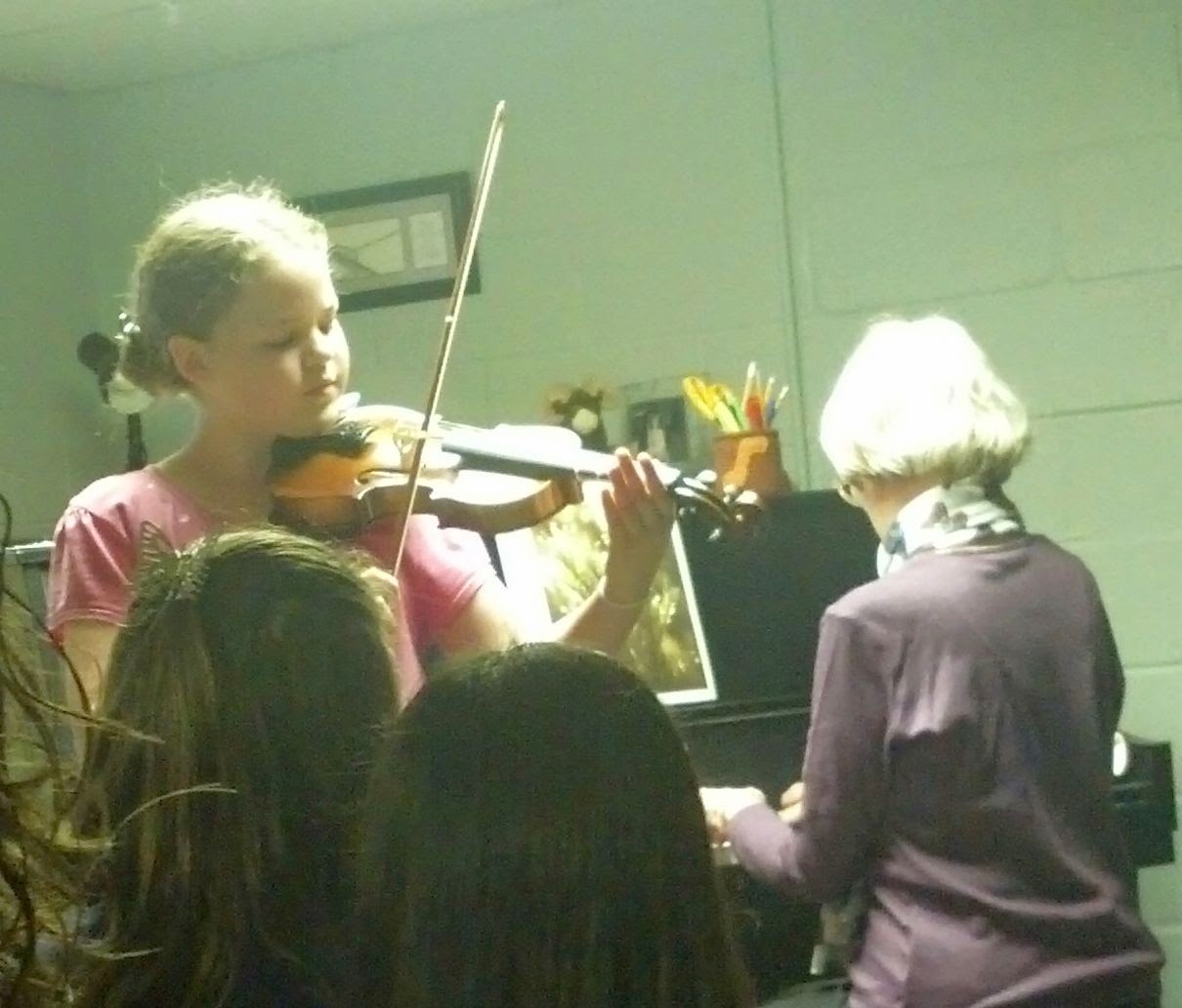 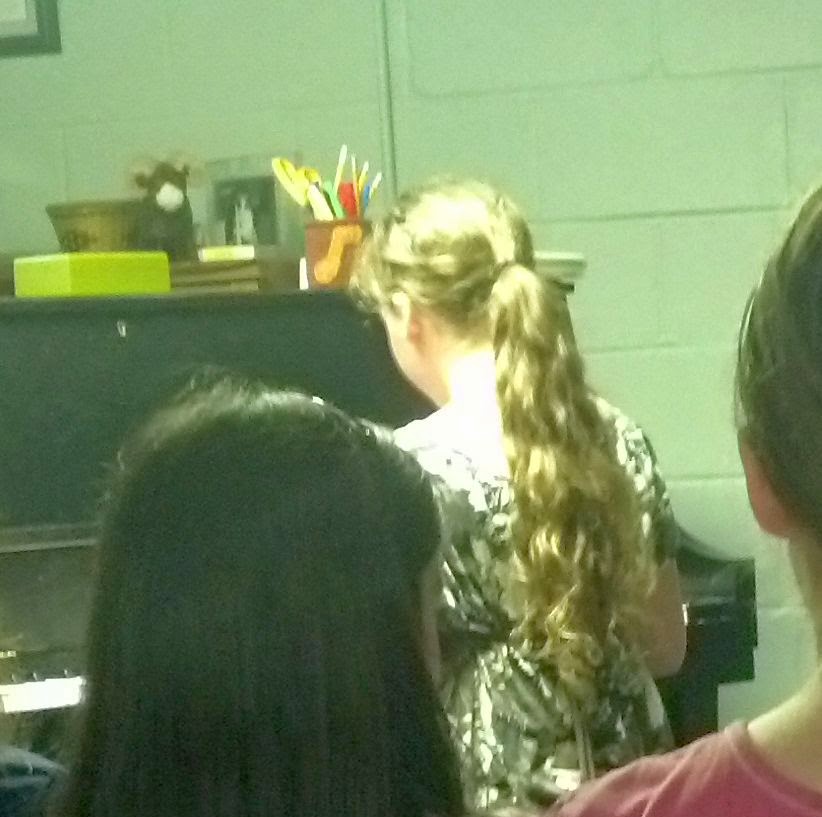 Lexie and Ashlyn both did fine with their recital, including the duet that *I* was nervous about . . . I'm not sure they ever practiced it without threatening bodily harm, but thankfully they did fine at the actual recital.  I was sitting near the back so couldn't get great pictures, but at least I have proof that they were there LOL.

Monday afternoon Little Bit had a playdate with her friends, E & J.  They had new, bright orange swings at their house, so that was a big hit :) 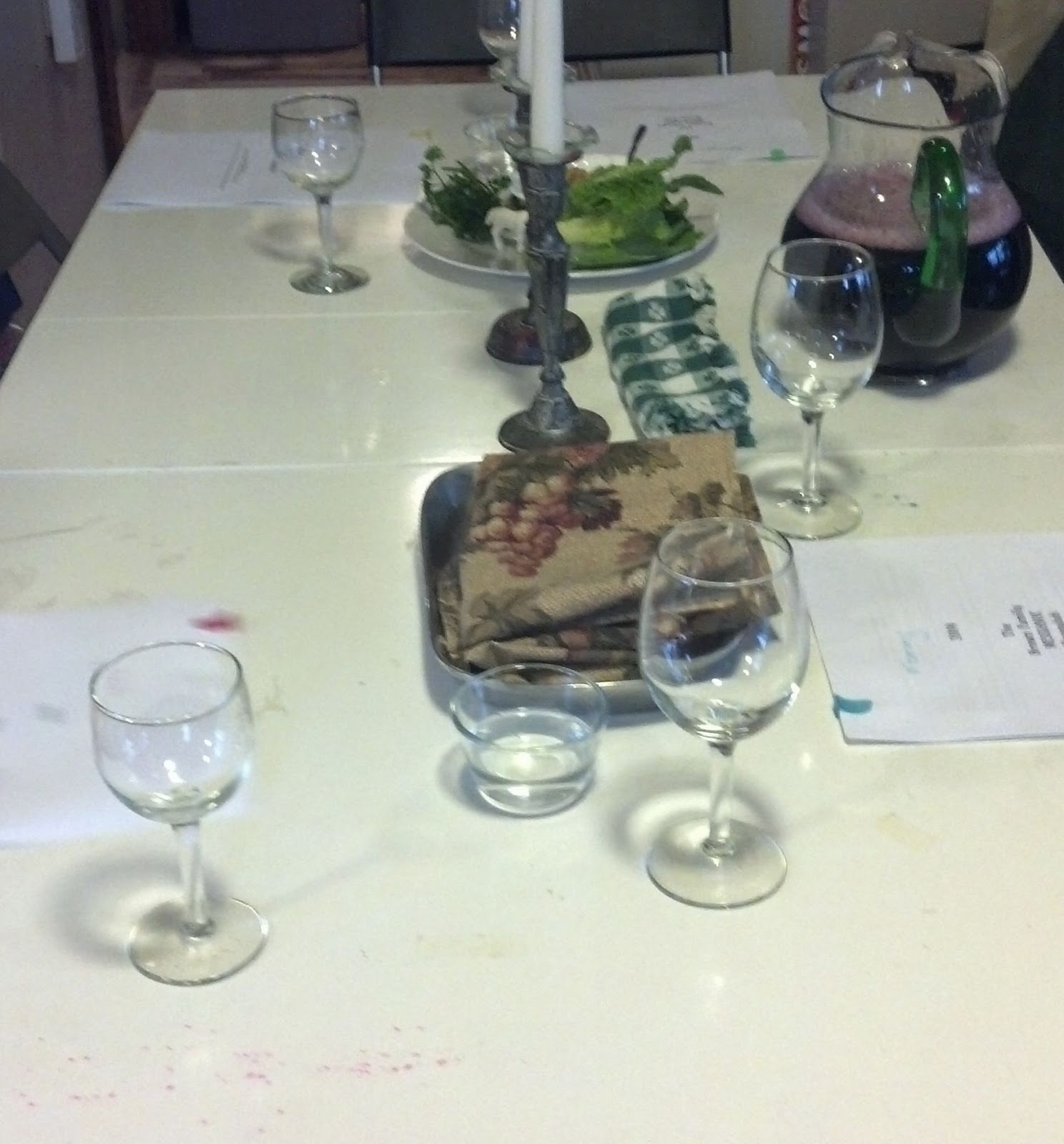 Monday evening was also the beginning of Passover, but since we were gone all afternoon that day, we decided to wait and have our Seder on Tuesday evening. Lexie is our supper cook this month, so she was in charge of the Seder meal, but we all chipped in with the ceremonial elements.

Little Bit was excited to be big enough to have parts for HER to say this year too. 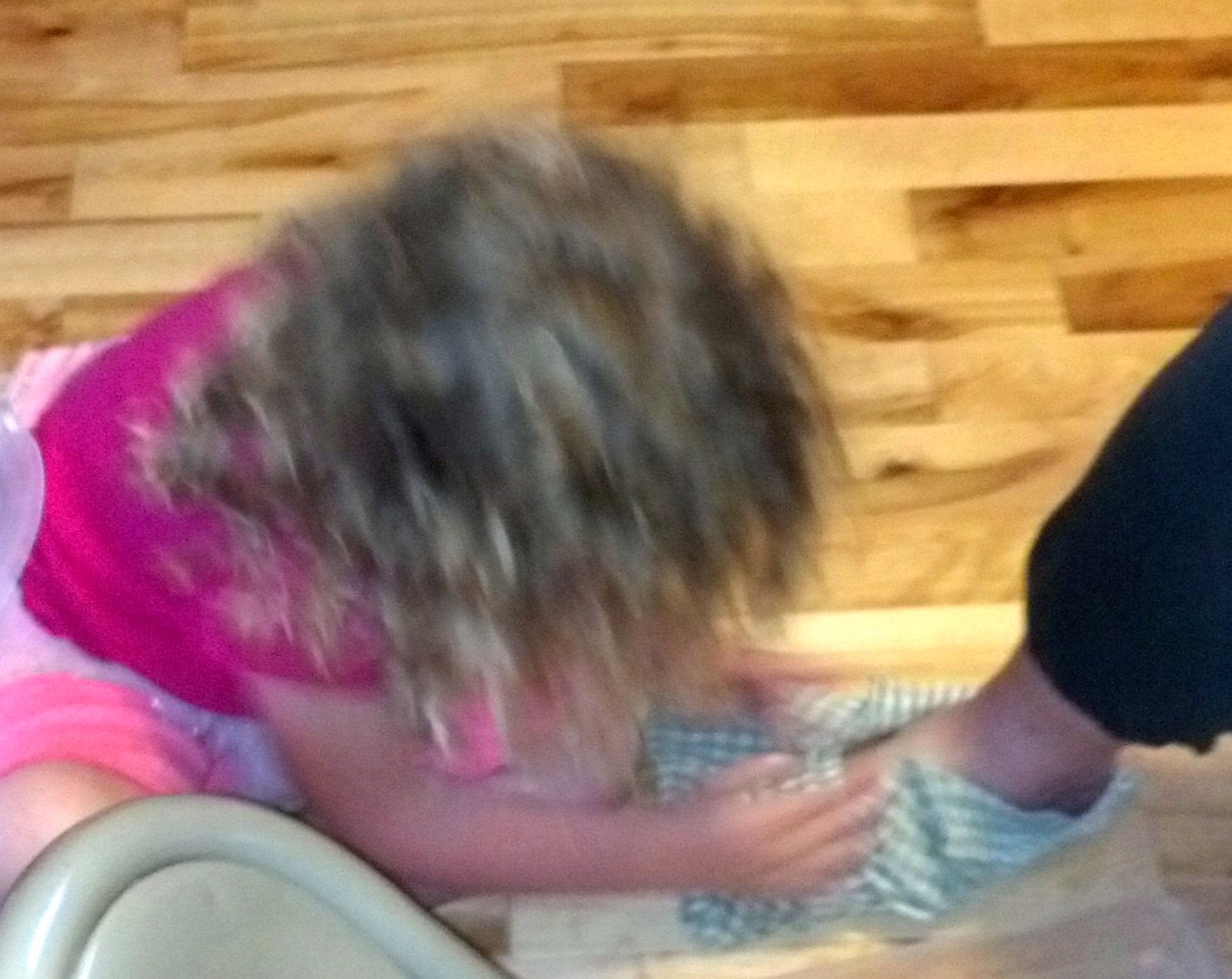 One of the extremely meaningful parts of the seder for me, is that it would have been during the seder that Jesus washed the disciples feet at the Last Supper. So one adaptation we make is to include foot washing as a part of our Seder. Traditional Jewish Seders include a ceremonial hand-washing, so that is an easy place to substitute foot washing.

I think Little Bit's other favorite part was getting to drink FOUR glasses of grape juice AND it was her first time having a "real glass". 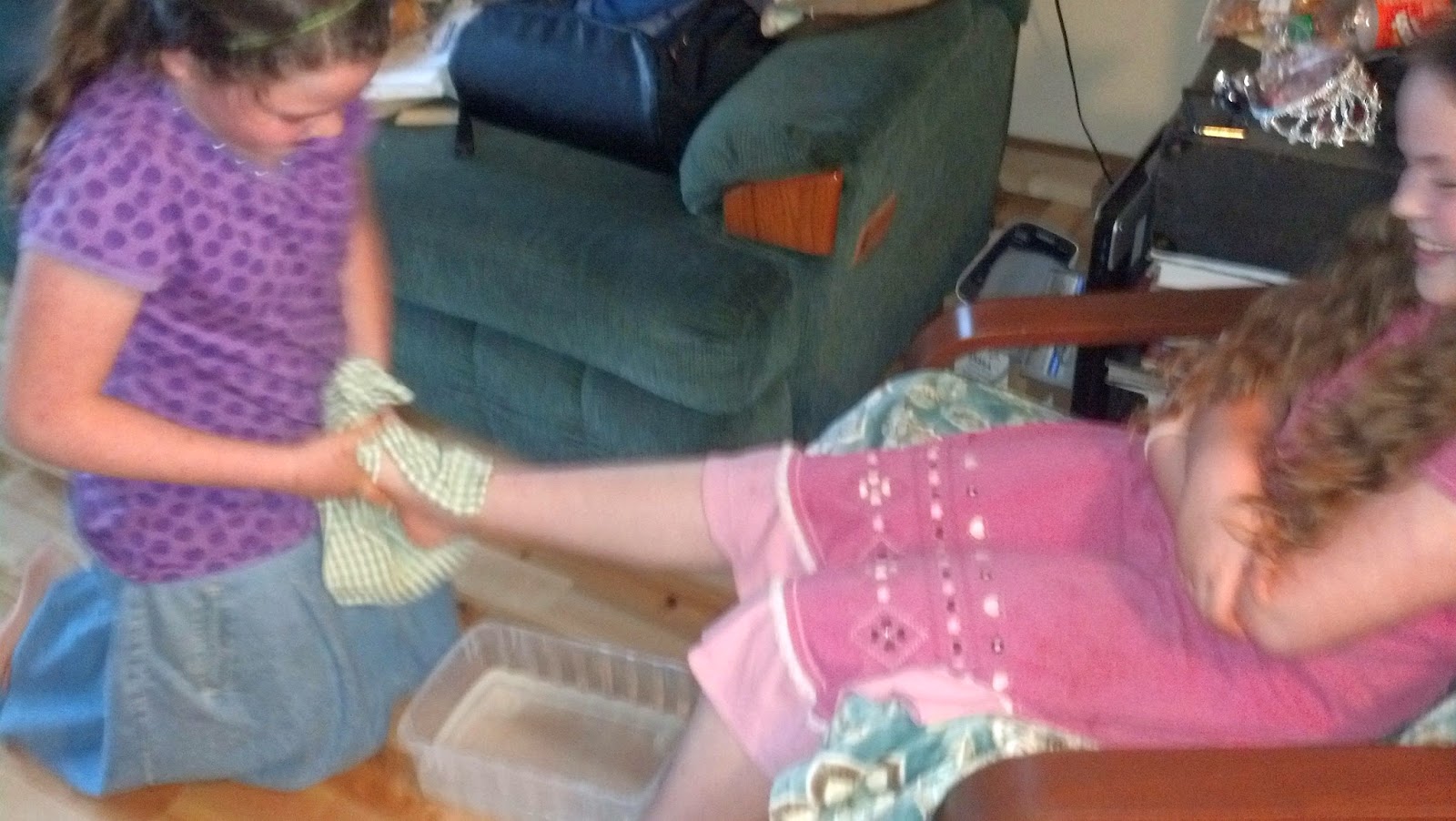 For Shabbat (Friday night), we use stemware, but I have a fancy mug that we use for our Kiddush cup (to pass the first glass of "wine"/grape juice around while saying the blessing over the wine), and she's always just used that as her cup. But since we don't have a Kiddush cup as a part of the Passover Seder AND because it's probably a 12oz mug, so not exactly something to fill 4 times throughout the meal, we decided to do something different. The goblets were had were some we got from Goodwill the first year we celebrated Passover and were quite small (intentionally so), but we were only able to find 4 when we got them, and then one recently was broken, while drying dishes, so we only had 3. Goodwill isn't as close by as it used to be, and I didn't plan far enough ahead to check there for more last time we were on that side of town, so I found inexpensive, but larger, wine goblets at Target and declared those to be for the adults, and the 3 small ones for the 3 girls. The big girls weren't too thrilled with that arrangement, but Little Bit was very excited to be big enough to have a glass like Sissies :)

Much to our annoyance it got COLD again this week! Dropping below freezing a couple nights, and not being warm enough to want to spend all day outside like it had been the week before. Because of that, and rain, and everything else we had going on, I didn't get our raised bed put together like I'd hoped, but I was just as glad we hadn't gotten around to PLANTING anything yet, with the colder than normal temperatures, so there are pros and cons . . .

Friday afternoon we headed down to my parents' house for the weekend. My uncle and cousin were coming for the weekend to see Grandma, and, since we hadn't seen my cousin since the twins were younger than Little Bit, we decided to come down and see them too. They got here Sabbath afternoon and we've been enjoying catching up.  During supper, the twins discovered that my cousin is a Chemistry teacher, and they've been peppering her with science questions ever since.