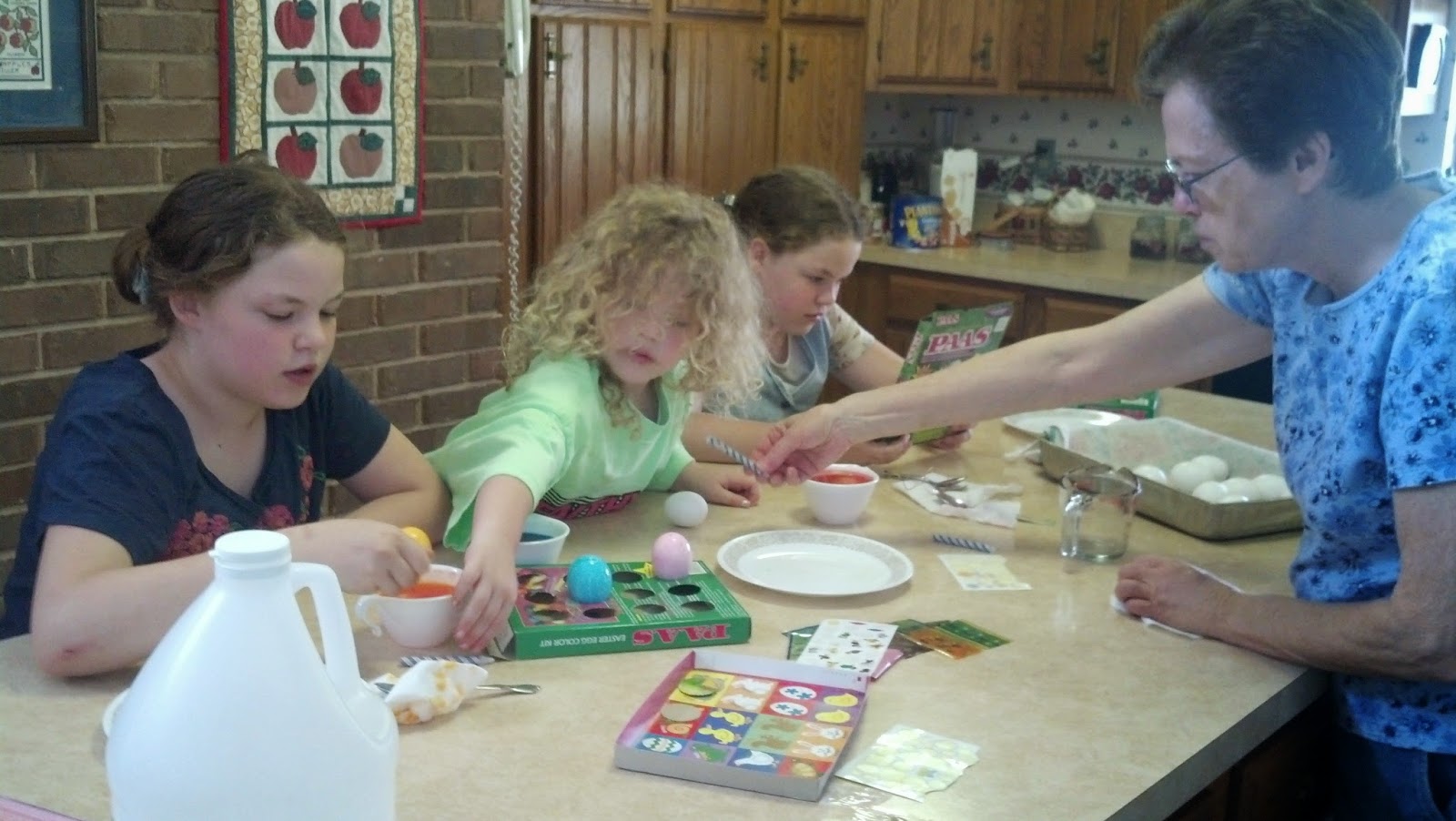 BUSY week!!! As you may remember, we were at my parents' house last weekend.

Sunday, while we didn't "do Easter" per se, the girls did have fun coloring eggs. My cousin and uncle were still there, so we had a nice family day visiting with them. Lexie and Ashlyn got another "Chemistry class" by peppering my cousin with questions (she's a Chemistry professor). 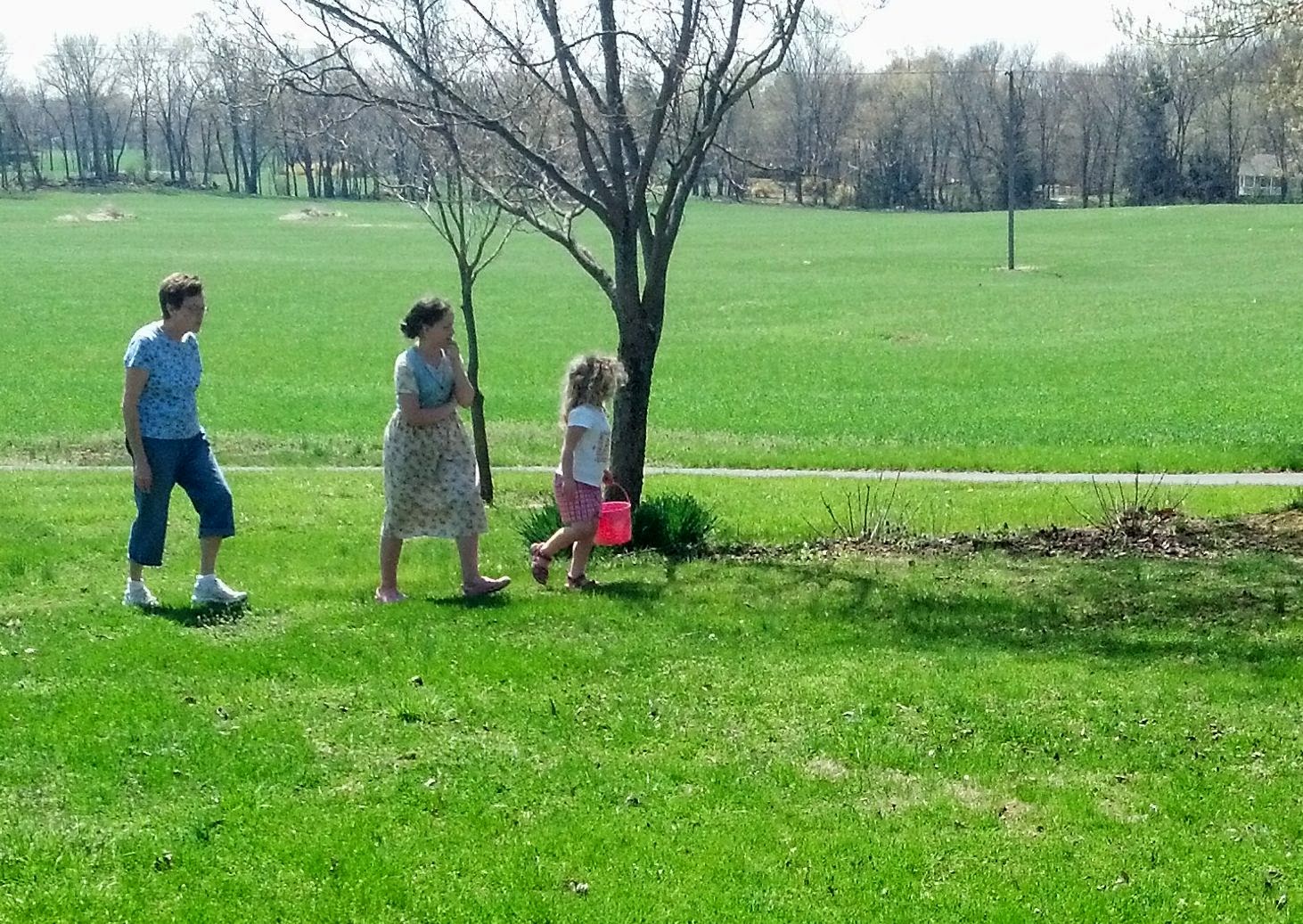 Sunday or Monday (I don't remember which) Mama hid plastic Easter eggs all over the yard (I think she said there were 40 or 50 of them!) for Little Bit to find. Lexie was a good big sister and kept her company and "coached" as needed when she had a hard time finding some of the eggs. They found all but one, and managed to find it the next day.  Ashlyn was busy mowing the lawn while all this was gone. She spent a good part of Monday on the lawn mower, helping to mow a bunch of my parents' lawn AND my grandma's yard. By the time she came in she was brown with a layer of dirt, and abit pink from the sun as well. 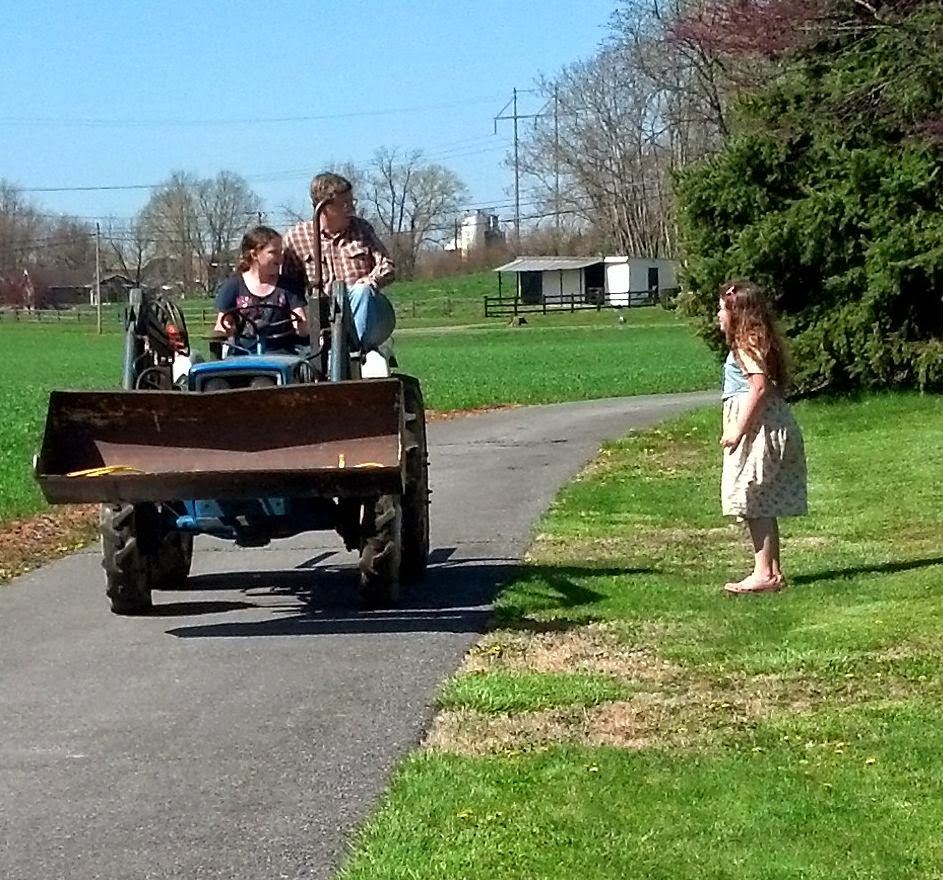 Somewhere in the midst of lawn mowing with a garden tractor, she took a break and drove the big tractor, with some help from Papa down to Grandma's house for something. Lexie, Little Bit, Mama and I were walking back from Grandma's house when we met them coming down the drive, and Lexie joined in with whatever fun (otherwise known as work) they had planned, while Mama, Little Bit and I made sure to stay far away from the wild driver, hee hee.

The reason we didn't go home on Monday, as I'd originally planned, was because I learned a few days before we headed down there, that the National Museum of Natural History, in DC, was closing their dinosaur exhibit this weekend, for a FIVE YEAR renovation project! 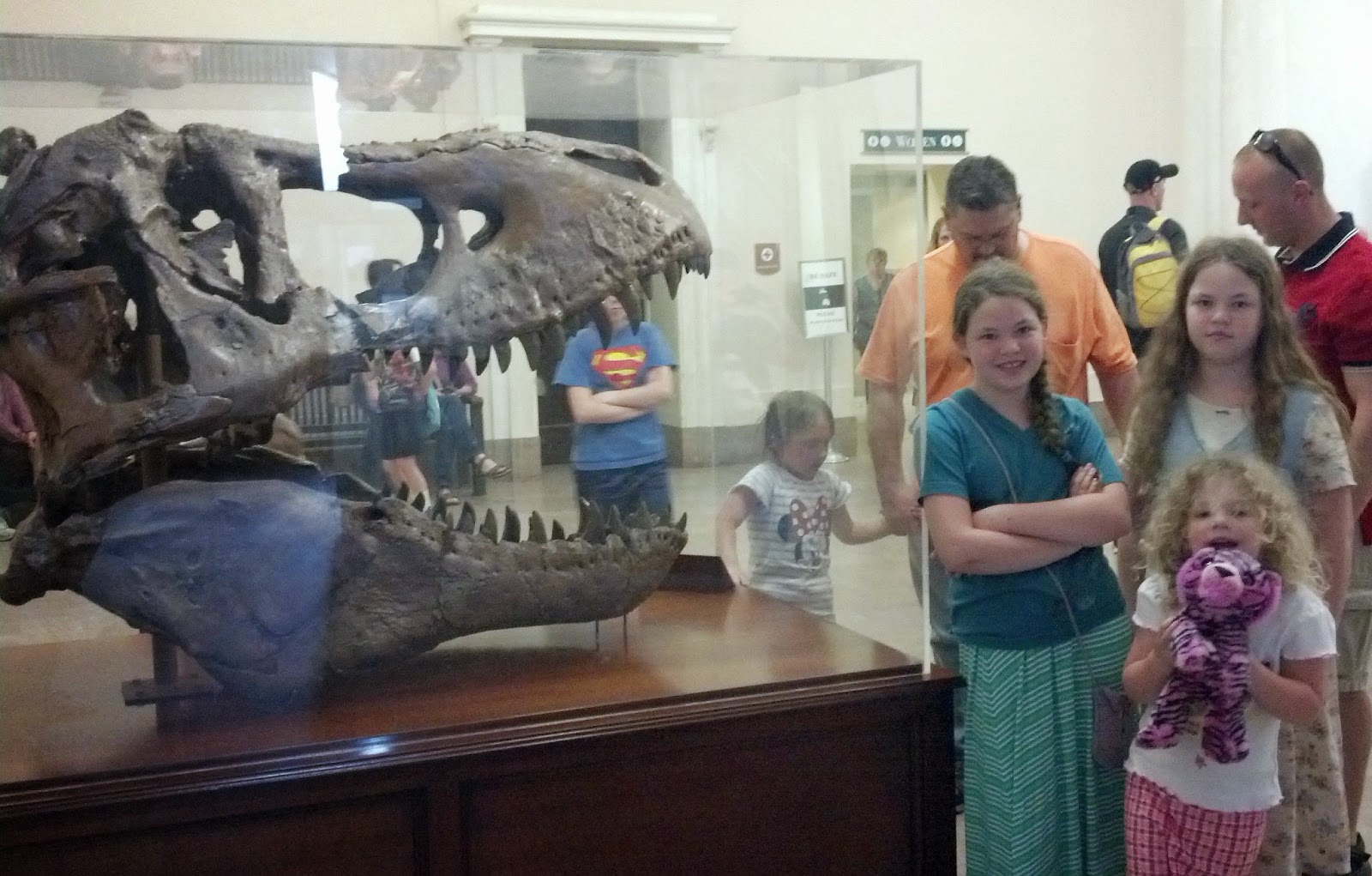 So we decided to stay at Mama and Papa's a couple of extra days and spent Tuesday visiting the dinosaurs.  Mom decided that Grandma's health is such that she shouldn't leave her alone all day, so she stayed home and Papa took the 4 of us down into DC and dropped us off at the museum, while he went to get some coins at the mint (he collects the state quarters and the president dollar coins, so he needed some of those that are easier to get directly from the mint, or maybe from someplace near the mint, I didn't pay that close attention, rather than trying to get them at normal banks) and National Park Passport stamps. 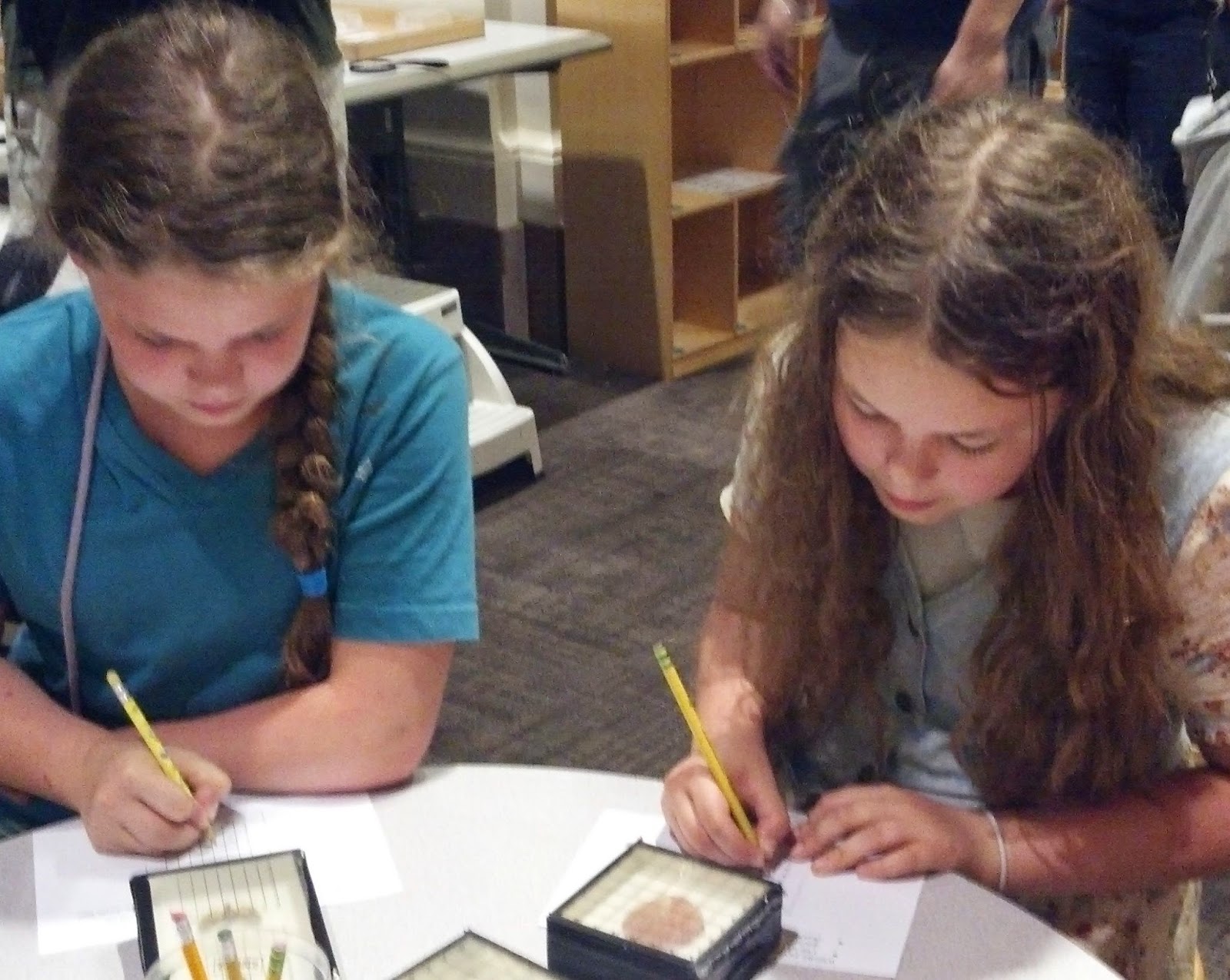 When we first got there, we walked right in, and while the dinosaur exhibit was crowded enough that I didn't try to take pictures (the picture above is with a T-rex scull in the lobby of the museum, even it, I didn't manage to get a picture of without other people behind the girls LOL), it wasn't too crowded to be interesting.

After we finished with the dinosaurs, we found a "discovery room" for kids, that also was busy, but not too busy to be fun. It had all kinds of hands-on stuff and was a nice mix of things for my big girls, and Little Bit to enjoy! The big girls enjoyed trying to draw various nature-ish things that were in boxes with a grid on the clear plastic lid, so the kids could use grid-paper to try to draw the items to scale. 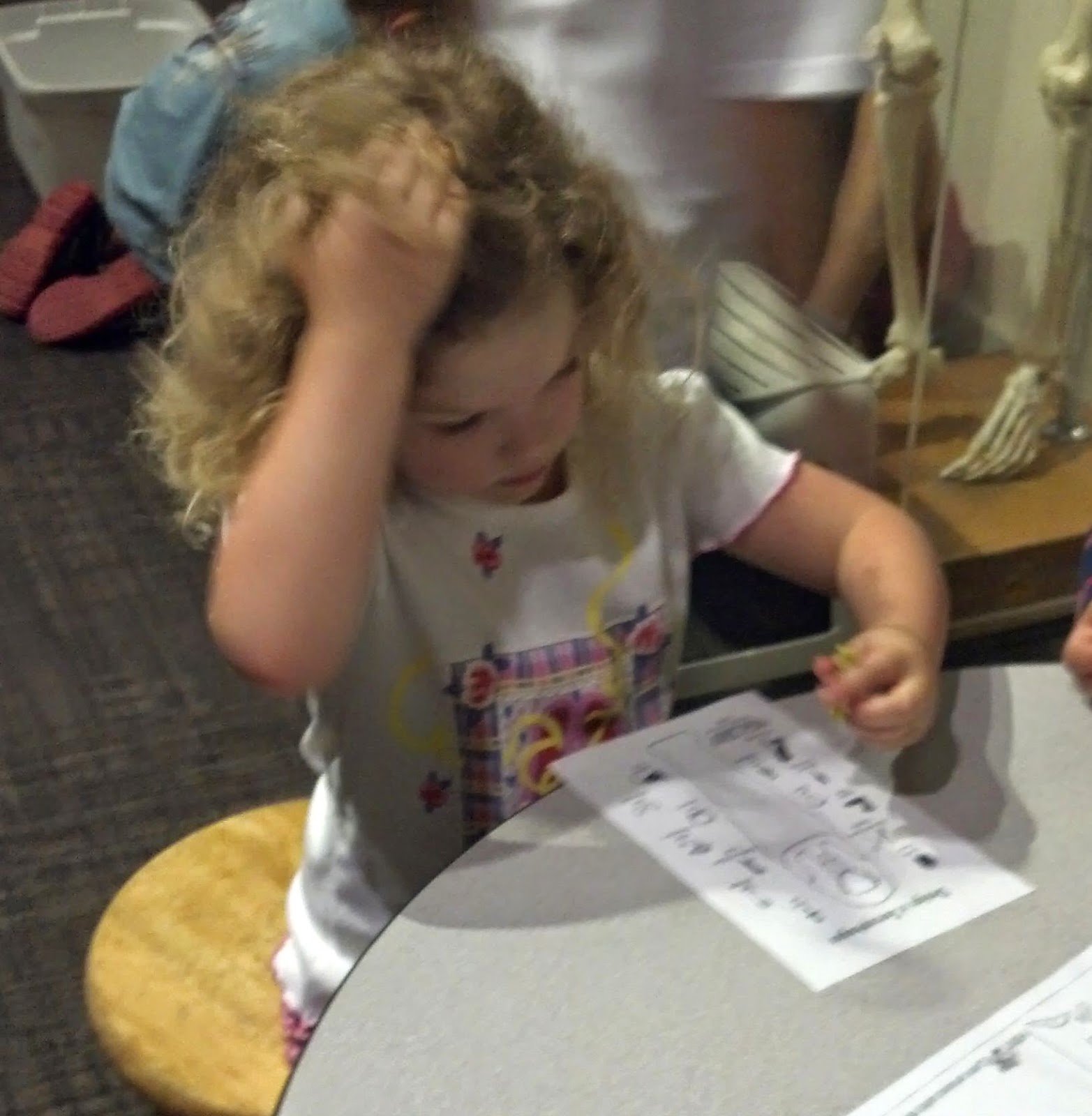 While the big girls were busy with their drawing, Little Bit and I found another table with drawing stuff that was more her speed. I think she was decorating an Egyptian mummy case, but my favorite part of this picture is that she's holding her hair out of her eyes so she can see to color. Her hair is always wild, and she is almost always insistent that she doesn't want it pulled back at all, but for some reason, this week, it was even more in her face than usual, to the point that it even bugged her, but not enough that she'd let me pull it back, silly girl.

When Lexie finished drawing, she moved on to another table that had stamps of various Egyptian heiroglyphic symbols, so the kids could write messages in heiroglyphics or decode messages or both . 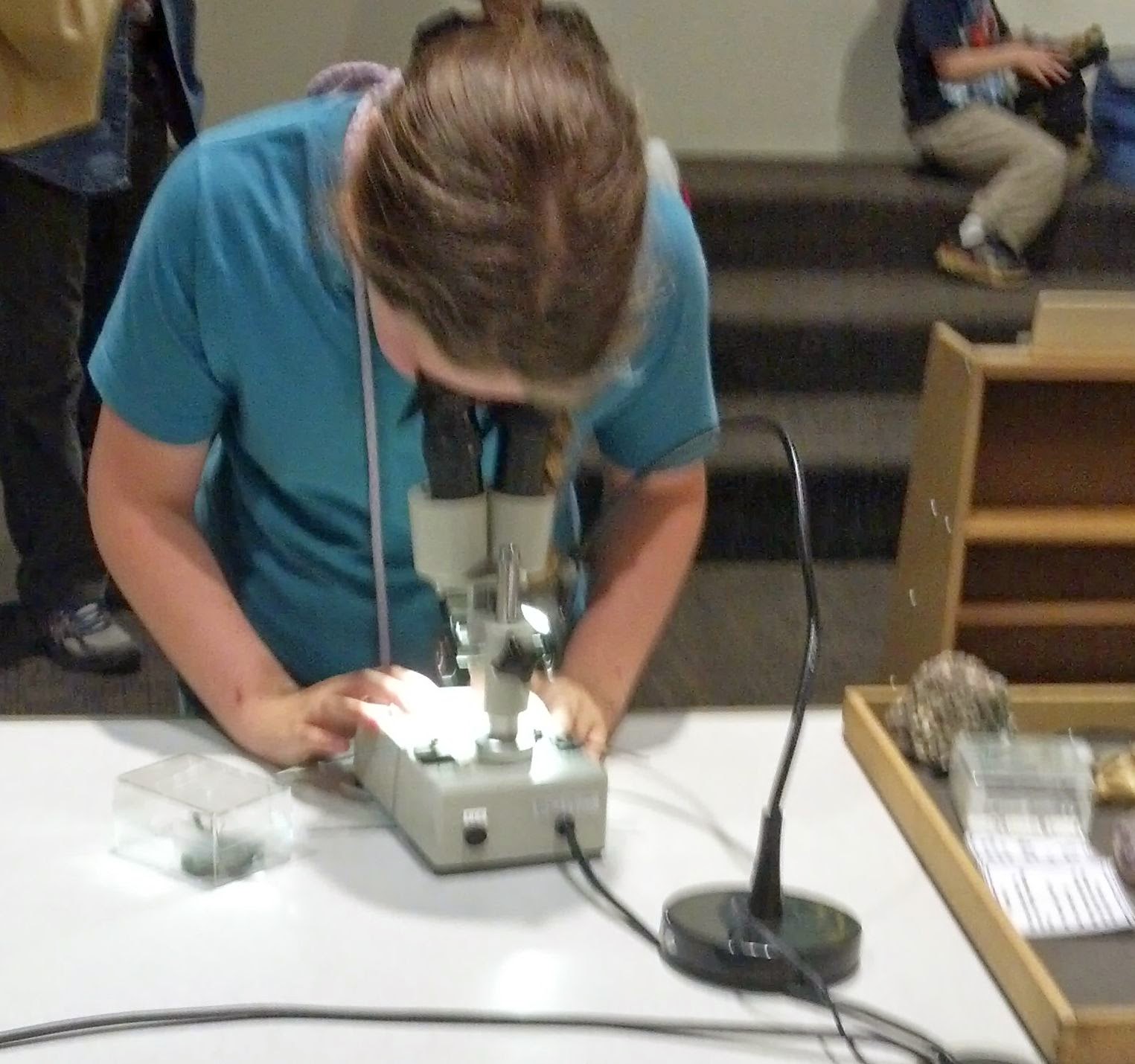 Meanwhile, Ashlyn found a free microscope (they were popular, so she was lucky to find one available) and spent quite awhile looking at the stuff they had with the microscopes.

From the time we first got there, Little Bit was most interested in a skeleton puzzle, but it was very popular too. Finally, we managed to catch it free, and she worked on it, and then got one of her sisters to help her finish it up before we moved on to other parts of the museum.

By the time we left, early that afternoon, there was a HUGE line, winding all around the large "patio" area in front of the museum, and on down the main sidewalk, just to get INTO the museum! So I can't imagine how crowded the dinosaur exhibit was by that time, nor how mobbed it must have been this weekend!

Wednesday we headed home and spent Thursday and Friday getting settled back into our normal routines. Thursday also meant spending some time at the church, setting up the Sabbath school room, since we hadn't been there yet this month! And when we left the church we stopped by our little, local museum, for a final visit to the Dora and Diego exhibit since it's leaving in early May and we're not likely to make it back there again. Actually, depending how this week goes, I may try to fit in another visit this Thursday, but I didn't want to mention that possibility to Little Bit, in case it didn't happen :) 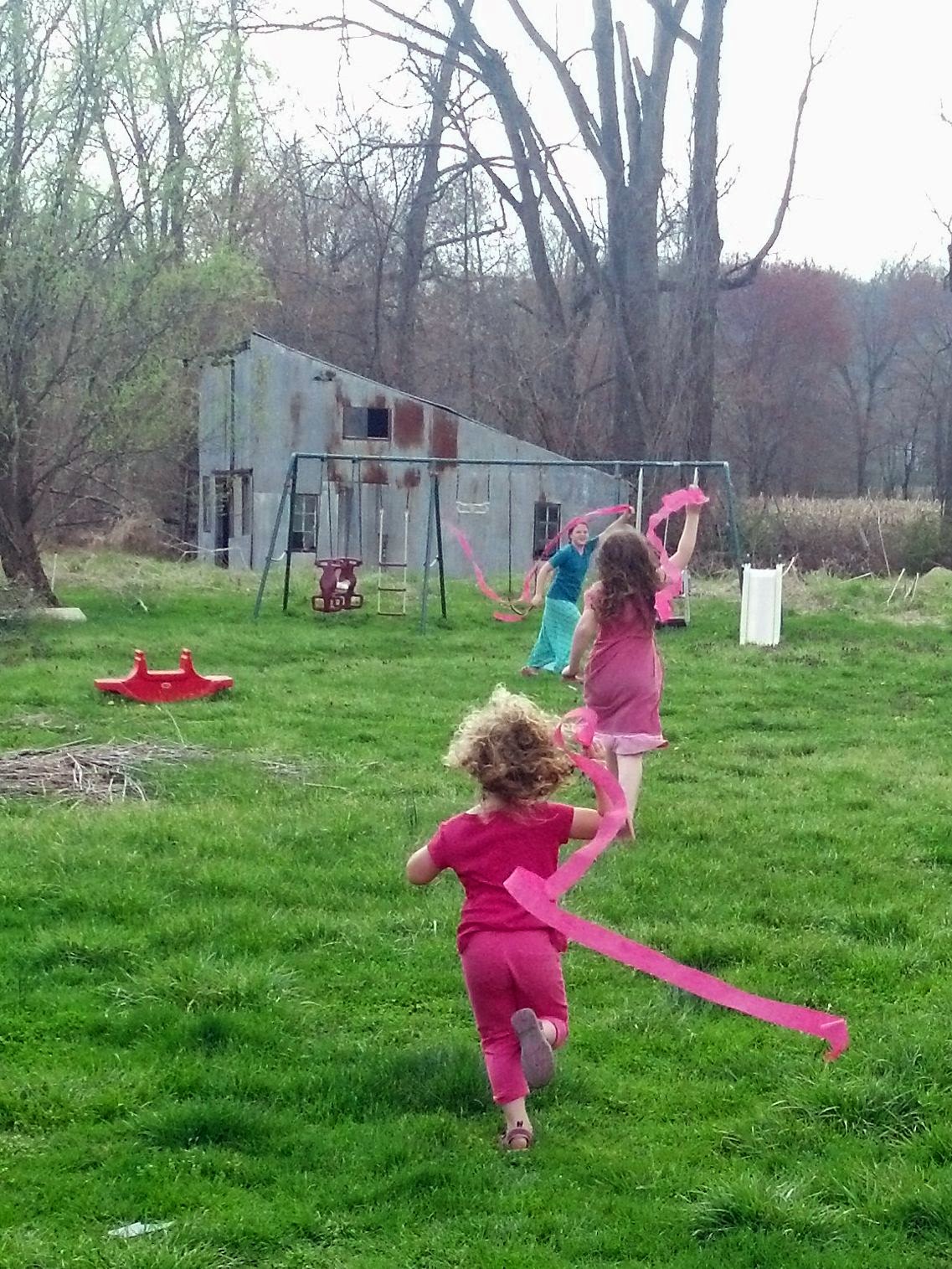 While this week's been colder than the last couple, we still had some beautiful spring weather, and took advantage of a breezy spring afternoon to try out an idea I'd seen on Pinterest awhile back. Instead of kites, we flew streamers!!  Just took some cheap party streamers and each took a nice long piece of it and ran around. It's so lightweight that the wind easily picked it up and it flipped around in the air behind as we ran. It was rather addictive, if I do say so myself, and the girls spent a large part of an afternoon having fun with it. Definitely an idea to tuck away and pull out again as needed :) 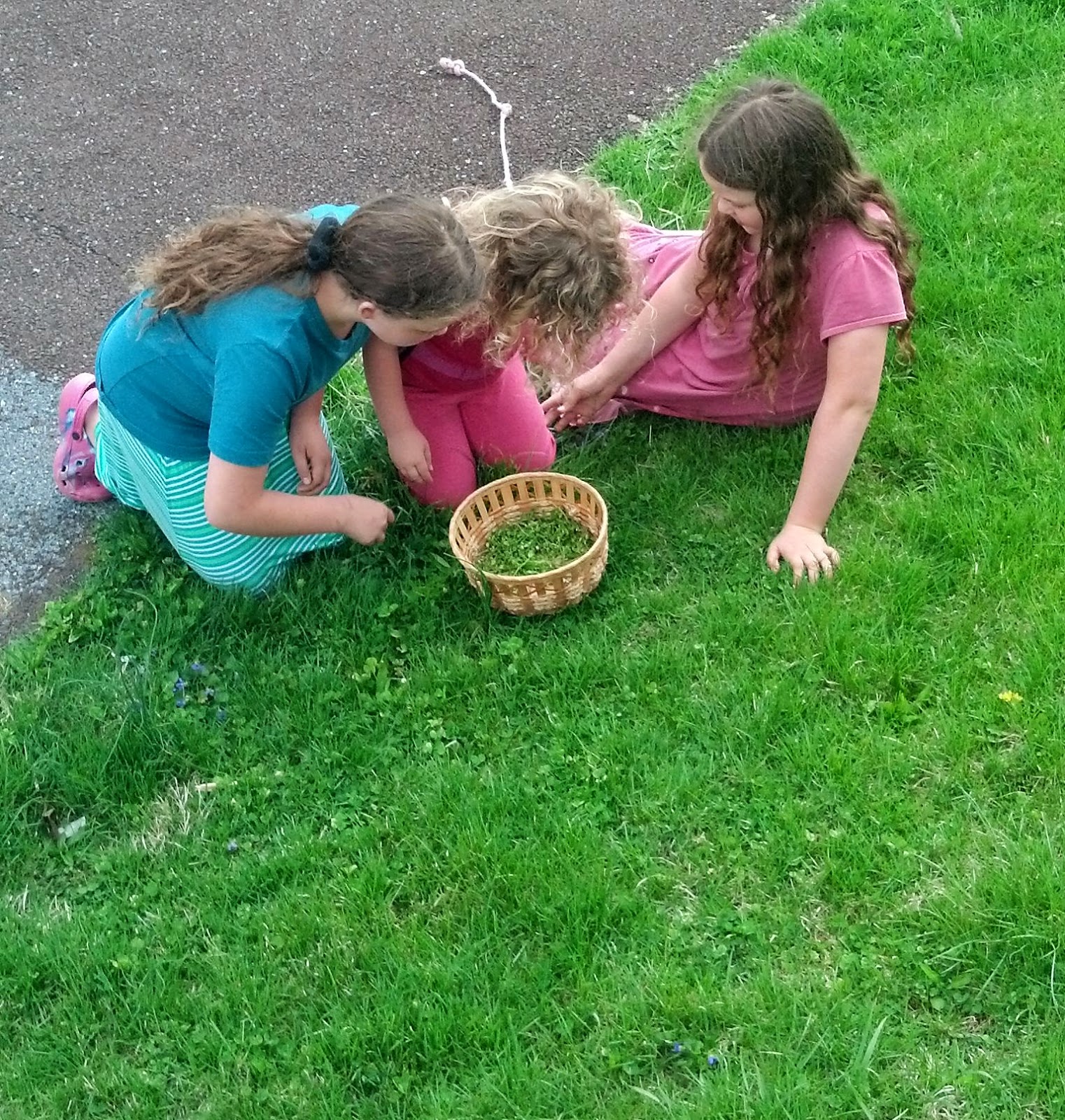 We've been enjoying re-visiting our Herb Fairies stories this year, but when we left for Mama and Papa's house we were just starting to see Chickweed (the first herb of the series) and hadn't seen any violets (the second herb) yet. But now both chickweed and violets are in full bloom! So the girls are having fun gathering chickweed and violets for our salads. We also had chickweed and goat cheese sandwiches on Thursday and I'm still hoping to convince them to pick enough to try a chickweed pesto with pasta later this week, we shall see. If nothing else, they're having fun gathering the herbs :)

We planned for Friday night to be our first Friday night cookout of the season, but after a beautiful day all day on Friday, right before suppertime, it started to rain, sigh . . . 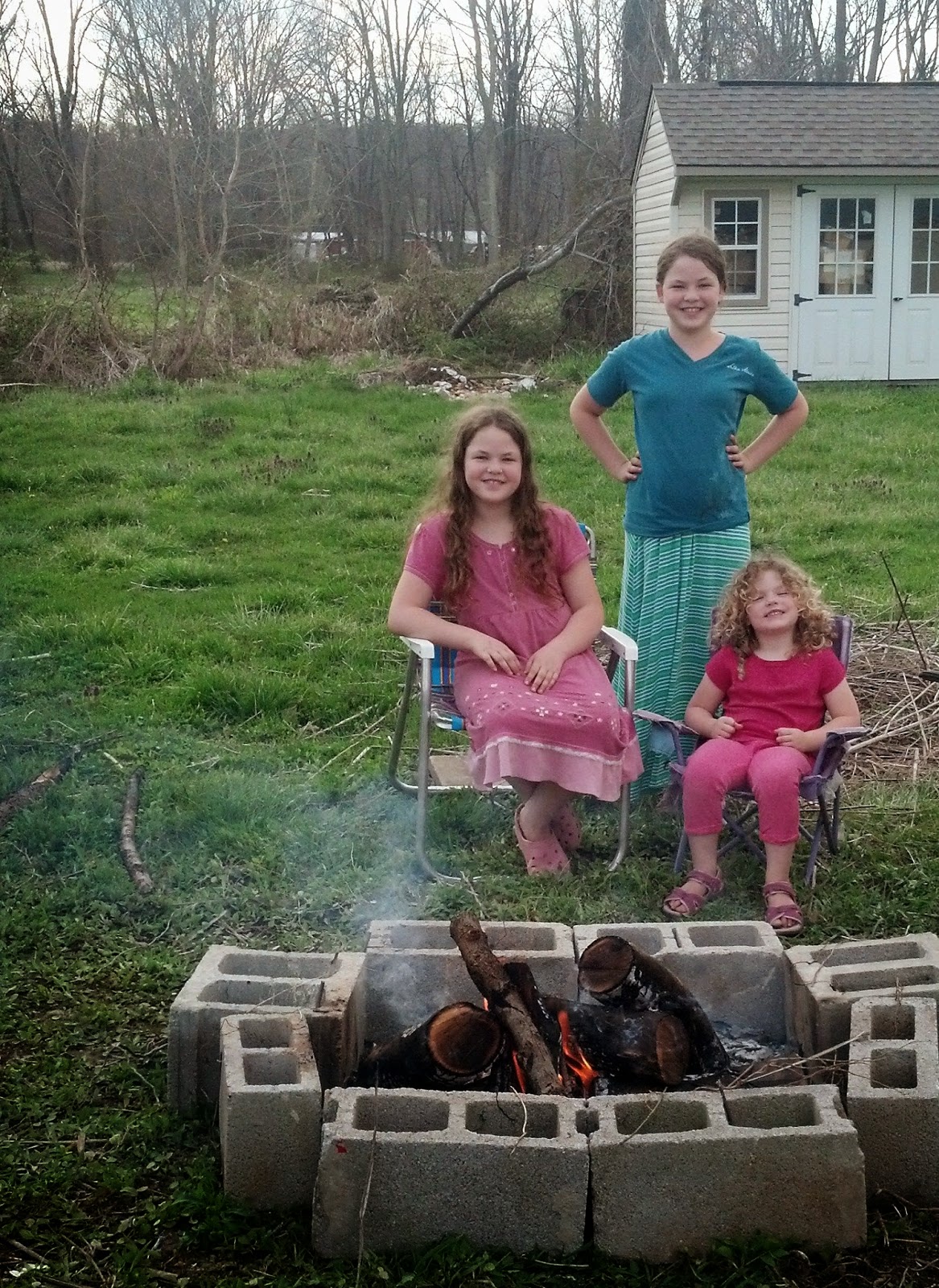 Normally, that just means no cookout that week, but this was our FIRST ONE. Also, I had an ulterior motive. When we visited Grandmom a few weeks ago, I brought home a few cement blocks that she had laying around and am HOPING to do a very small raised bed garden inside the square (ish, shape . . . they aren't all the same size of blocks so it's far from perfect). I figured if we had our first campfire inside the square that would hopefully kill off any weeds in that area AND lay a nice layer of ash as the bottom layer of the raised bed. So, on the off chance that I'd have time to do something more with it this week (not looking likely, there's rain in the forecast, sigh . . .) I kinda wanted to get the campfire part of the process done.

So we decided to have a Saturday night cookout. When I went out to try to HELP the girls with the fire, I was told to go away, though I think in the end, when the lighter was giving them fits, they accepted Daddy's help. It was perfect weather for it and an all around great evening roasting hot dogs and marshmallows and eating salad that the girls had picked in our yard :)
Posted by Unknown at 8:02 AM