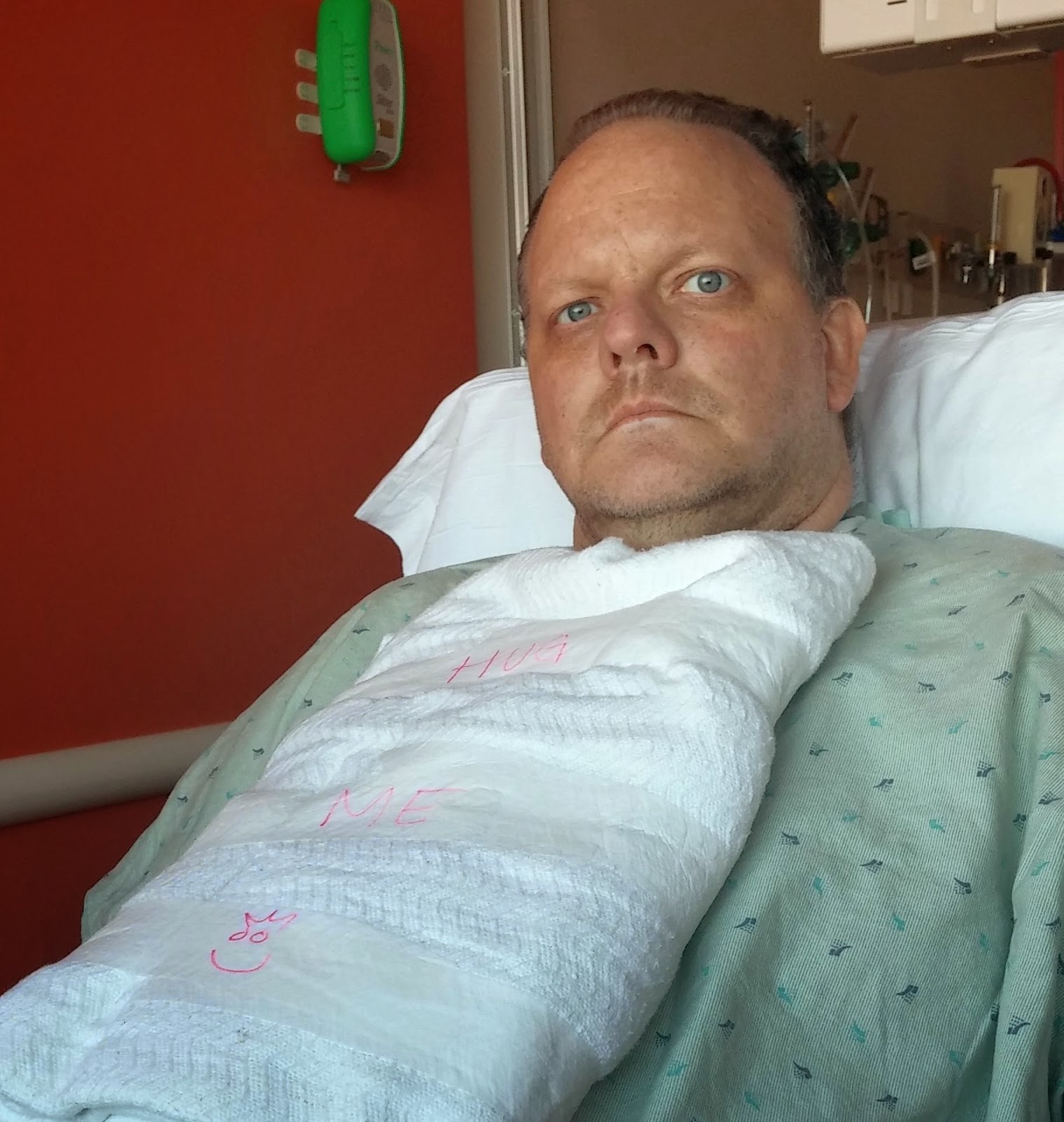 Another week spent at the hospital, and we're still here, but unlike a week ago, dh is walking and talking and joking around and glaring at the camera and . . . himself!!

Since my last update, he's continued to walk every day. He figure out that he can sleep more comfortably in the recliner, and has gotten some quality sleep, which he said has made a world of difference mentally.

Eating was a slow start . . . his throat and jaw were SOO sore from the breathing tube, that for a few days there he lived on plain yogurt and cottage cheese (he doesn't eat anything at all sweet, and pretty much all of the hospital's "soft" foods were sweet). Yesterday was the first day that he ate full meals, but he did, including a turkey sandwich, without it hurting, so that is a huge improvement!

He still has lots of puffiness on his legs and feet, especially if he doesn't keep them elevated enough, but I don't think there's any puffiness left in his arms and hands.

He's coughing quite abit and still has some fluid and/or "gunk" in his left lower lung. Walking, using the little breathing exerciser gadgets they've given him, and just focusing on breathing in deeply and slowly, is really all there is to do for that.

He is apparently either having less pain than most people experience or he has a higher pain tolerance, or some of both, because he's not really on any pain meds and the nurses and nurse practitioners seem abit confused about that LOL. He said it's not painless, but it's not unbearable so he'd rather not add even more "fuzzy medicine head" (he has enough of that from all the other meds they have him on) by taking pain meds unless he really needs them.

On Friday, the Home Health dept of the hospital called and said that the word they had gotten was that he MIGHT go home over the long, holiday weekend. So, since they don't work weekends, they confirmed our contact information to be able to set up home health visits once we're home. So far, nothing definitive from the nurses or doctors about when we're going home, but we're hoping for soon! and the nurse said his guess is tomorrow or Tuesday. Most of what we're doing now could be done at home, and he could sleep alot more comfortably, and our family could be together again and such.

In other news, the girls are continuing to do well at my parents' house. As mentioned in my last update, I went up there Monday afternoon to Tuesday afternoon. It was good to see them! They were all abit more . . . snuggley than is their norm, but otherwise did fine, with me being there, and then leaving.  Not sure if it's just the age, or if spending time with Papa, the answerer of all questions on how things work, but Little Bit's "question button" has been pushed. She is now keeping up nicely with her sisters on asking questions about everything!

My dad was surprised, one evening he "owed" her a piece of candy for something she'd done, and he asked her if she wanted one piece of candy right then, or to wait until morning and get 5 pieces of candy Said she didn't even hesitate, and waited until morning. When he was telling me about it, with her there, she was kind of like "well duh, I got MORE candy that way!". Smart kid :) I was also proud of her, when she lost her second tooth the "tooth fairy" (which is much more generous at Mama and Papa's house, than at home LOL), gave her 3 pieces of candy (yes, I gave dad a hard time about the irony of the TOOTH fairy giving out candy LOL), and she shared them with her sisters "because there were 3 candies, and there are 3 girls". I love how generous she is!

The big girls continue to help my mom with meals, and to help watch my grandma, who has started wandering off abit, and sometimes tries to do more than she safely can. The girls trade off just kind of hanging close to where Grandma is, so that someone will see if she tries to go somewhere or do something that isn't safe.

Thursday my dad brought all 3 girls down to the hospital to see their Daddy (and me). They did great, just hung out with us for a little while, asked a gazillion questions, and then happily took home the big bouquet of balloons that dh's office had sent. Little Bit has had great fun playing with them :)

So that's about it. SOOOO thankful that things are looking so much better, Now we're just hoping to get home soon!
Posted by Unknown at 11:27 AM

I'm so glad to hear your husband is doing much better! Your family continues to be in my prayers, and I hope to stop by your blog in the next day or so to hear the good news that you are all at home!